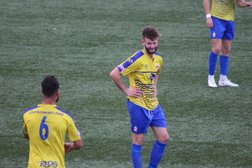 Paul Smith knows his side must be ready from the first whistle when they take on Evo-Stik South – Premier Division Central leaders, Kettering Town, at Latimer Park on Tuesday evening (7.45pm KO).

The Reds rebounded from a sluggish start against Lowestoft Town during their previous league outing to win 4-2 and extend their winning record to five games from six, but Smith said the players can’t afford a repeat in their bid to overcome a side that has 12 of their previous 14 league matches.

He said: “This is our toughest game of the season – no doubt about that – but we are in excellent form ourselves. We’re third in the form table, behind Kettering and Stourbridge, so we go into the game of full confidence and fancy ourselves.

“We know we must bring our ‘a-game’ from the start; Kettering put four past Stourbridge, the only team that’s beaten us in the league since the end of September, so we know what we’re going to be up against.

“They’re a team full of quality, but we don’t hold any fear and we’ll go into it looking to be tough and difficult to beat but also cause some problems when we have the ball, which we’re more than capable of.”

Ahmed Ali, who scored a brace against Lowestoft, is a player that Smith will be without for the visit to The Poppies; however, the gaffer will be able to call upon Richard Batchelor, who joined the club over the weekend.

Smith said: “Ahmed is an outstanding footballer and one of the best central midfielders in the league – he’s been terrific since returning to The TRICO Stadium – but his absence means an opportunity for someone else, and Richard is a player that boasts hundreds of games at this level, is a leader and has a strong desire to win football matches.”

Another player that Smith will be able to call upon is Mitch Piggon, who also signed last week. A striker by trade, he will offer something to different to the forwards already on the books, explained the manager: “Since I’ve been at the club, I’ve been looking for a player with physicality up front – and in Mitch, who is strong and 6ft 4”, fits the bill.

“He will allow the other forward options we have to flourish and play their natural game, as Mitch will hold the ball up and look to feed his team-mates. He trained on Tuesday night, is fit and I know he’ll be a valuable asset for us.”

Both Piggon and Batchelor will be available to face Kettering, but Ali (unavailable) and Lewis Wright (calf) will not be in contention.