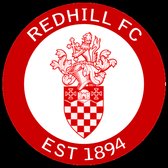 Redhill travelled to Frimley on Saturday in good spirits after last weeks FA Cup victory.
But were made to work hard for three points by a solid Frimley team, who had started their league campaign with a draw the week before.
In humid conditions, at the Recreation Ground, the Reds battled away in the first half in what was quite a scrappy affair where space and time on the ball were hard to come by.

The first of few chances in the first period fell to Redhill's Tony Halsey, a Reece Brewster free kick found Halsey but his header hit the outside of the post and went out for a goal kick.
The game continued to be scrappy as both sides tried to gain control, with neither really stamping their authority on the game.
Kery Kedze had the Reds only other real chance of the half, when he was found with a brilliant cross field ball but his lobbed effort over Freeman in the Frimley goal looped over the bar.

Frimley's only real sight at goal came from an attempted cross, which nearly caught Vokaty out and flicked the top of the bar.

The Reds started brighter in the second half, and tried to stretch their opponents with their pace in attack, chances were still at a premium though, and it started to look as though it wouldn't be the Lobsters day.
Eventually though their quality showed, Marlon Pinder was found down the right by Ashley Snadden and it was the wingers great first time cross that was met by the clinical Kery Kedze who headed in to give Redhill the goal they had been desperately searching for.
The game was finally put to bed in the 82nd minute, a Brewster corner found the unmarked Luke Jones who headed home to make sure Redhill's good start to the season continued.

The win was soured late on, as Tony Halsey was harshly sent off. The striker picked up his second caution right at the death for apparent time wasting. Meaning the striker will now face a ban.
Other than that though, it was a good day at the office for the Reds.