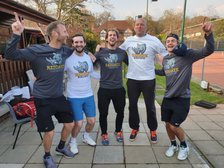 Wow, what a day we had at the club on Sunday 14th April culminating in a match between our Team Tennis Mens Team (better known as the “Reigate Rhinos”) against Sutton Tennis and Squash Club.

James had arranged a full fixture of events for the day starting with the “Battle of the Sexes” between our Ladies 1st Team represented by Amy Braund & Anna Ramsbottom and Jackie Llewellyn & Louise Targett and our Men’s 2nd Team represented by Chris Huntley & Nick Marsh and Jason Endsleigh & Frank Dudley.

The match kicked off at 10:00 with weather conditions some would describe as cold. With a very vocal crowd watching on (mainly made up of our Lady Supporters), two rounds of doubles matches were played. Unfortunately for the Ladies they came up short losing the match 3-1 but Amy and Anna did have the consolation of beating Jason and Frank in a tense three set match.

The Reigate Rhinos match was scheduled for a 14:15 start time. This was their first home match having won the previous weekend away to Globe LTC in the South East (South) Regional Division. The Reigate Rhinos Team was:

With our Club members and their friends streaming in (estimated around 150+), James was determined to create a Davis Cup like atmosphere with various instruments on hand to create as much noise as they could including three air horns, tambourine, snare drum, wooden blocks and vuvuzelas. With the Bar open and a BBQ going, everyone was in a festive mood especially Jason Endsleigh who during our opponents warm up decided to run among them with a rubber rhinos mask tormenting them with various comments. He did manage to escape with his life!

With the matches being played on Courts 1,2,5 & 6, the crowds were evenly displaced around all courts. It soon became apparent that the crowds were more than equal in creating that Davis Cup atmosphere with constant sounds echoing across the club grounds.

The first match to finish was on court 5 were Adam played an opponent with a very good serve. He therefore had to be patient and wait for opportunities to break his serve. One break in each set was enough for Adam to win comfortable 6-3, 6-3.

The second match to finish was on court 2 with Barry having to play an opponent he has coached for many years on the Pro Circuit. As they knew each other very well, this was always going to be a tight match which proved to be the case. Barry eventually emerged as the winner, winning 6-3, 7-6.

The third match to finish was on court 6 where James was playing. This proved to be a serving match with neither player able to break serve. By the time James finished the match, the crowd was three deep on the grassy slope next to the court creating a great noisy atmosphere. He emerged a 7-6, 7-6 winner with the crowd chanting his name.

The top match on court 1, Sam was having a real battle with an opponent well known for his movement around court and defensive attributes. They played a series of high quality long rallies with neither of them getting the upper hand. This led to a first set tie break which unfortunately Sam lost. With his opponent now having the momentum, Sam soon lost the second set 3-6.

After the round of singles, we were 6-2 up. The crowds now moved to courts 1 and 2 for the doubles matches. Our pairings were Sam & Adam and Barry & Jack.

On Court 2, Barry and Jack were in very tight first set which went to a tie break which they eventually lost. This coincided with Sam and Adam’s win so having already won the match overall, there was less pressure for them to win their match. Therefore the second set went quickly to their opponents 3-6.

So another win for the Reigate Rhinos 8-4, who still remain top of their Division. Their next match will be away to Parklangley Club 1 in Kent on Sunday 12th May and our next home match will be against Putney Team 1 on Sunday 19th May.

A big thank you to all our supporters, you really did create a great atmosphere at the club and played your part in winning the match. Thank you to Malcom Rae and Peter Knight for running the BBQ, to Gillian Rae, Elena Knight and Janet Kenny for their work in the kitchen and to me for running the bar.

Also a big thank you from the players to the catering team above for providing a scrumptious meal after the match.