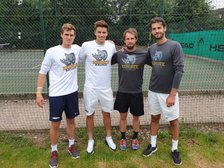 REIGATE RHINOS finish with a flourish

The Rhinos having already secured promotion to the National Division travelled to Hampstead, North London to play Cumberland LTC Mens II team in the Regional South East (South) Division on Sunday 23rd June with a match time of 10:00 am.

The Team Sponsors GEW represented by Gillian and Malcom Rae came along to watch the Singles matches. The match was to be played on acrylic hard courts with the Singles matches being played on courts close to the club house. We had a superb view of all the matches, and once again the level of play was high.

The courts played reasonable fast and Andy in the top match had a tough second set against an opponent with a fantastic serve and a solid all-round game. However, he came through along with the rest of team to secure four singles wins:

The courts used for the Singles matches were booked for another Team Tennis match, so the Rhinos had a long trek through the Club grounds, past the Club Cricket field to reach a couple of acrylic courts to play the Doubles. The boys decided that the college boys should play together leaving Andy and Adam to play first pair.

Again, with the serve being so dominate, Andy and Adam had few opportunities to break their opponents serve so a single break in each set was enough to secure a win. Joe and Josh had a slightly easier match, whilst the first set was tight, they easily won the second set. The scores were:

Another 12-0 win for the Rhinos leaving them undefeated and run-away winners of this Regional Division. They will now play in the National Division (South East) next year which will bring even more exciting tennis to the club, playing against many of the top British players.

To celebrate the success of the Rhinos, the club will be holding an event on Friday 28th June, starting at 6:45pm comprising of a Tiebreak Shoot Out Competition involving all our Rhinos players with prize money on offer combined with a Cocktails Evening. So please come along and celebrate the Rhinos success.