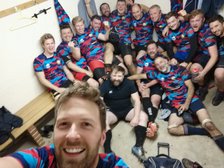 Saturday saw Reigate Horley 1XV run out at Haslemere for their second away fixture of the season. Given the deluge of rain seen in the week there was concern around pitch conditions, however this was soon put to bed with a flowing backs attack, with outside centre Sam Mills scoring in the corner following a broken tackle and offload from fullback Mark Watson, cancelling out an early Haslemere try.
Not to be outdone by the back line, the Reigate Horley forwards set up an effective lineout drive in the Haslemere 22 with hooker Dan Harris crossing the whitewash after peeling from the back, with the try converted by scrum half Jack Pellan.
With the Reigate Horley back line hitting the breakdown in Haslemere’s 22 several forwards were lining up out wide to show more attacking prowess. Number 8 Richard Stoner took the pass in the middle of the pitch, threw the dummy pass and crashed over for great try again converted by Jack.
Yet more attacking play followed towards the end of the half, with Watson again making a linebreak on the back of some great phase play from Reigate Horley, offloading the ball to second row Barry Ridler who had run a fantastic support line to trundle over from close range.
The second half was a scrappy affair, with several injuries suffered by the away team, taking away some of the structure and Haslemere were able to take advantage to close the gap with two more scores to set up a tense finish.
Reigate Horley kept the ball close to the breakdown as the clock wound down and when the final whistle came the travelling team had held on to secure a 26 -21 victory, leaving them sat at the top of the Surrey 4 table with a perfect record.

After his first game coaching Reigate Horley Matt Sanford commented, “the injuries in the second half really didn’t help us and we certainly allowed the opposition back in, but I’m really proud of the guys at how the hung on in and ground out the result at the end.”