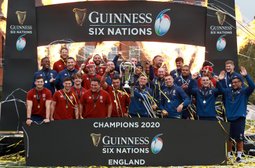 Support your club and chance to win cash prize!

There’s no doubting that the past year has been tough for rugby clubs up and down the country, and whilst it’s great to see the 6 Nations tournament returning on schedule, it’s a shame that we won’t be able to enjoy it our Colley Lane clubhouse together this year.

To help try and make up some of the lost revenue this year and to also add a bit of spice to the tournament you can enter our new competition - The Winness Six Nations! 50% of every entry fee will go directly to supporting your club, with the other half being added to the grand prize pot. The more people you can get to enter, the bigger the pot you can win! All we need is:

Please send all guesses to Dan Harris either by email or drop him a message on 07552 610 223. You can make payment to the new Oaks Draw (Bolus’ Balls) account – Dan can provide details if required.

Think about it, on the final day you get to enjoy an English victory over the Irish and the satisfaction of taking the Chairman’s money – what more could you want!

You can additionally join Reigate Rugby Club’s Fantasy competition here this a free to enter league with the grand prize of bragging rights!

Winness 6 Nations Game Rules:
- Closest guess to overall points will be declared the winner, in the event of a two or more players having the same guess/being the same distance away, the number of tries will be used to determine a winner
- If any games are not able to be played by the scheduled final day (20th March), an average of points will be used to simulate a final tally, should Guinness 6 Nations Tournament organisers award points in lieu of a fixture this result will be used.