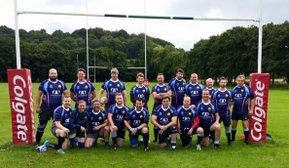 Reigate came out on top in a tough encounter with Old Whitgiftian Warriors, capitalising on the still dry pitches to play some fluid running rugby with the ball in hand. Following an away walkover last week to Streatham-Croydon's 3XV, Reigate and the Warriors were pleased to have the opportunity to play again with both teams looking forward to the occasion.

With no league referee available, Reigate were dealt an early blow with No. 8 and Club Captain Lyndon Kinsley having to dust of his whistle for officiating duties. In a tough first half, Reigate found themselves 3 points down early on due to indiscipline in the ruck, however were able to score a try shortly after the restart following a powerful scrum, with Andy Davison crossing for his first of 3 first-half tries.

Reigate used much of the first half to get the ball wide after composed phase play at the breakdown, taking opportunities to open up a strong Warriors defence, with a strong centre partnership benefiting from timely delivery provided by both half-backs. Both wings and fullback Adam Sherry were able to use ball kicked to them to build a counter attack with pace and pose a threat on the fringes of the pitch.

Jonny Mann made a scoring return to the club, with a strong finish on the touchline following another patient build-up from the Reigate team. Additionally Valentino Dulis also crossed the whitewash in the first half in a strong performance that saw him scoop up man of the match, working hard at the breakdown and offering himself with some fantastic running lines. In what one of the lighter moments of the first half, Tom Beresford was able to run a hard line from deep, into the Warriors defence, letting out a war cry of his own - which gave cause much laughter post-match!

The second half was a scrappier affair, with both sides getting plenty of scrummaging practice in, Reigate continued to control the ruck area and use forward pods effectively. An appearance from international-sensation LuLu came about as Andy Davison needed to wash his face. Reluctant 7 Matthew Sanford took over from Kit Harper in the 42nd minute, following his half-time substitute for Grahame Shaw who, on his return to rugby in the past few weeks has played exceptionally well. Reigate were unable to capitalise on a several 5 metre scrums, with Old Whitgiftian Warriors not only holding firm twice but eventually winning a scrum of their own and clearing their lines.

With a front-row injury to one of the Warriors' props, scrums were required to go uncontested, with stern words from the referee 3 times that there would be no '8-picks' allowed, and hastily adding no pushing was allowed either. The Warriors were able to capitalise on firm scrum base, getting the ball out-wide to a formidable back line who were able to use pace and power to carry the ball down the pitch on several occasions.

Old Whitgiftians were able to dig deep and score a try using slick handling to catch the Reigate defence napping. With time running low, Reigate were able to return once more to the opposition half, using the full width of the pitch to build more phases before darting through a mismatch out-wide to cap off a fine performance by the whole team with one final try.