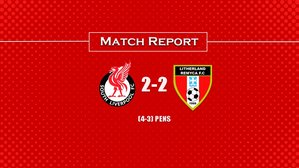 Match report as REMYCA are knocked out of the Macron Cup.

Litherland REMYCA exited the Macron Cup after a 4-3 penalty loss to South Liverpool.

Despite dominating for large parts of the match, REMYCA could only draw 2-2 in normal time.

A cross from the left by captain Ashton Clements found Cox in the box. His snapshot from the penalty area was well saved by McCoy.

On the half hour mark, REMYCA hit the woodwork.

Striker Jamie McDonald was played through the right channel by Kieran Halliday but his chip over the keeper struck the outside of the post.

Three minutes into the second half and South Liverpool took a shock lead. A back pass was intercepted by Dalton who rounded Ryan Jones to tap home.

REMYCA pushed for an equaliser and got their reward with 21 minutes to go.

An exchange between Adam Hammill and Jamie McDonald saw Hammill strike a shot low into the bottom right corner.

Colin McDonald’s side momentum proved valuable as they struck again a minute later.

A cross from Halliday was deflected into the path of McDonald who tapped home to give REMY the lead.

Owen Hough was fouled in the area and Dalton stepped up and scored the penalty to send the match to a penalty shootout.

After each scoring their first two penalties, both South Liverpool and REMYCA missed their third with each keeper pulling off great saves.