Top Club is a club development programme initiated by Cricket Scotland in 2005. The governing body recognised the need to engage more closely with member clubs and actively support their development, particularly with regard to the junior game. At the same time, several clubs were keen to build their own capacity and become more proactive in responding to the changing context of the game. After studying several models of club development, Cricket Scotland launched Top Club combining elements of both developmental planning for clubs and a simple accreditation and recognition scheme for local clubs.

How it works
The professional staff at Cricket Scotland are providing 'hands-on' support and practical guidance to member clubs to progress through the five levels of the scheme. The first two levels are concerned with ensuring the basic structures are in place within the club for the proper development of junior club cricket. The final three levels are more cricket-specific and lead to an accreditation of the club at bronze, silver and gold levels.

Level 1 - 'Active' - supports the club in becoming fit and ready to work with children and young people. Clubs are expected to develop a Juniors Committee and to create and implement a Development Plan. There needs to be a commitment to moving the club forward.

Level 2 - 'Approved' - verifies that all the basic requirements have been met: child protection procedures, disclosure checks, first aid arrangements, and other key practices are checked to ensure the club is properly set up to engage young people in the game.

The bronze, silver and gold levels require clubs to take more responsibility in progressing their own development and effectiveness, with some support from the governing body.

As they move through the levels, clubs are required to engage in coach development, competitive junior matches, progressive player pathways, and participation opportunities in area and regional squads. 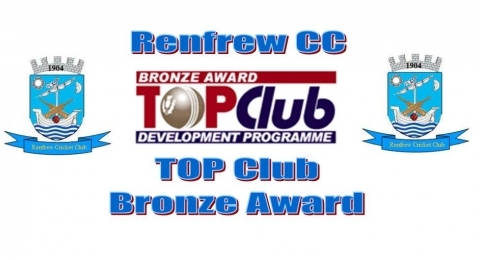 The reaction of the clubs
When the Top Club scheme was first launched, Cricket Scotland needed to promote the scheme through discounted access to coaching events, and direct contact with potentially-interested clubs in order to build up a critical mass. After eighteen months, word has spread and many more clubs are choosing to opt-in. The governing body has also decided to apply some pressure to the more established clubs by making participation in the scheme one of the criteria for clubs to join the National Cricket League.

So far over 60 clubs have joined the scheme - more than half of all the clubs with junior sections - and significantly ahead of the scheme's targets. Several clubs have achieved the Bronze level and are working towards Silver.

There has been greatest interest in Top Club from the less well resourced or newer cricket clubs. They are keen to develop and become established. Some of the more established clubs have been more resistant, perhaps out of a sense of complacency or tradition. Because these 'senior' clubs are active in the National Cricket League they will be expected to take part in Top Club as it is now a criteria for League entry.

Lessons from the experience
Cricket Scotland - like many other governing bodies and sports clubs - underestimated the amount of work involved in devising effective child protection arrangements for clubs and managing the disclosure checking workload.

Effective club development does take time, particularly in the early stages when less experienced club committees are starting to get to grips with development planning and an audit of their relevant policies and practices. This is when clubs need most hands-on help from other experienced staff in the governing body or elsewhere. The higher-than-expected uptake for the scheme within cricket generated more workload pressures for the staff.

The outcomes within the clubs
Several clubs have achieved notable success in the game. Whilst this cannot necessarily be attributed to the Top Club scheme, sporting success is often the outcome of good planning, regular practice together with natural talent. Kinross Cricket Club started a new junior section and has been engaged in Top Club. Within two years, the juniors won the Under-13's Competition Cup in Scotland.

At a broader level, Top Club has led to an almost doubling in the number of club members engaging in level 1 coach education. The establishment of club development plans has highlighted the importance of coach education and led to clubs identifying members willing to participate in such courses. The increasing number of coaches is anticipated to lead to higher standards amongst both junior and adult players throughout the game over the next five years.