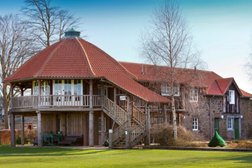 With the league season only a week away, Renfrew travelled to Doo'cot Park in Perth to play Perth Doo'cot, in a pre season friendly match.
It was a beautiful scene to great the first throws of the Scottish cricket season, with the picturesque ground bathed in sunshine and blue skies overhead for most of the match.
The home side won the toss and batted first, compiling a total of 160 for 6 wickets in their allotted 40 overs.
Stuart McCreanor benefitted from a couple of lives, in the form of dropped catches, to top score in the home sides innings, with 72, while Jamal Ali (30) and Asif Naeem (26) made important contributions.
Waqas Arshad and Sajid Majeed were the stand out performers with the ball for Renfrew, returning figures of 3 for 36 from eight overs and 2 for 14 from seven overs respectively.
In reply, the visitors made an encouraging start with Hafeez Saddiq (21) and Muhaymen Majeed (12) adding 25 for the first wicket.
Unfortunately, this was as good as it got for the young Renfrew side, led by new skipper Ryan Murray, as they could only muster 102 for 9 wickets in their 40 overs.
Ahmad Said top scored with 31, while Ryan Murray (13) and Ameer Abassi (13 not out), also got starts without going on to make the matchwinning innings' that was required.
For the home side, Khayyam Saral (3 for 17), Rory Pennycook (2 for 23) and Tyler Ridder (2 for 35) shared the wicket taking spoils.
So, it was a disappointing end to the first match, but was ultimately a good run out for a young Renfrew side.
On Sunday, it was normal service with the Scottish weather, as the second pre season friendly against Greenock, at Glenpark, was cancelled due to rain.
The league season starts this Saturday (28th April) with Renfrew taking on Kelburne at Whitehaugh, while the respective second elevens meet at the Deanpark Oval, weather permitting of course!