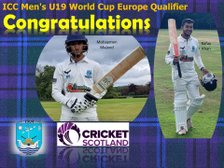 Very proud moment for Renfrew CC, Massive congratulations to Muhaymen and Rafay a great deal of commitment effort and hard work from both of them and their families.
They have also had tremendous support from Renfrew CC a number of coaches and the members. It is a tremendous honour for them their families , Renfrew CC and the WDCU with only 3 players from this region Cricket Scotland has announced a squad of 14 for the ICC Boys U19 World Cup Europe Qualifier which takes place later this month. Originally due to be played in Scotland in July, due to the ongoing pandemic the tournament was moved to Spain, and will be played at the Desert Spring Resort in Almeria between September 19 and September 25.

Scotland will play Jersey, the Netherlands and Ireland in the group stages with the top two teams progressing to the final. Only the overall winner of the tournament goes directly to the ICC Under-19s World Cup in 2022.

Lead Coach Cedric English said: “There is a really good level of experience and maturity in the group. A few have been to the World Cup in South Africa, but it’s also been great to see some of the newer players performing well in the run-up to the tournament. Playing in a tournament environment is completely different, but I’m confident that we’ll be able to put what we’ve been working on over the last three months into practice and perform well out there.”

Captain Charlie Peet, 18 from Edinburgh said: “There’s a real excitement around the tournament. We’ve got five guys who went to the last U19 World Cup and other guys who’ve just played a lot of cricket, so we can really draw on that during the tournament. We’re playing against three very good teams and the games come thick and fast, but we’ve managed to get a lot of good warm-up games in and everyone’s had a good amount of cricket which has been great preparation leading into it.”

Wicketkeeper Tom Mackintosh, 18, from Edinburgh, who also played in the 2020 event said: “I think we’re very strong in all departments. I’m looking forward to everything about the tournament. It’s not everyday you get to go and play at such a big event and every team there is capable of winning so we will need to be at our best.”