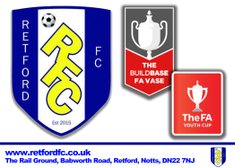 Retford FC found out their fate in the FA Competitons on Monday with disappointment that they do not have a place in the FA Cup, but will be representing the town in both the FA Vase and FA Youth Cup.

After a random draw, only three of the NCEL Division One teams will be flying the flag for the division in the FA Cup, Campion, Glasshoughton Welfare and Hall Road Rangers being pulled out of the hat.

The Choughs will be competing in the FA Vase with the first round qualifying scheduled for Saturday 19th September. Dates again are subject to change depending on government guidelines.

The Development side will also be representing the club in the FA Youth Cup and Manager Chris Woodhead, although disappointed with the FA Cup news, is happy with the involvement in the Vase and Youth Cup.

“It was a lottery as we were told by the FA. However I wish the 3 teams who were drawn out the hat the very best of luck. It’s great for our league that some teams are competing in the FA Cup.
We have been selected for the FA vase and the development team is in the FA youth cup so there is so much to look forward to for this football club. We are proud as always and seeing local players in FA competitions is something the town will be proud of.”

FC begin their pre season campaign at home to Goole AFC on Wednesday evening (5th) with the game being played behind closed doors due to government guidelines.