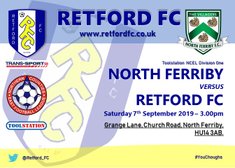 After a mixed week for Retford FC, the Choughs are on their travels tomorrow as they make the trip to Hull to face North Ferriby.

Last weekends disappointment in the FA Vase was soon forgotten with a great result away at Hallam FC with Retford coming out on top with a 3-1 victory, the lads will be full of confidence as they prepare to face the Villagers.

Both sides have had a good start to the season with an almost identical record so far, Played 6, Won 4, Drawn 1 and Lost 1 with Retford edging their hosts in the table on goals scored with both sides having a +6 goal difference.

North Ferriby, formed this year after the demise of North Ferriby United, have won their last two outings, a 2-0 win over Winterton Rangers and a 2-1 victory over Worsborough Bridge.

The game promises to be an exciting one as the sides meet for the first time, Manager Chris Woodhead, said “Well tomorrow will be a tough game, obviously Ferriby are promotion favourites so we know what to expect.
The Hallam game was pleasing after the two defeats. Credit to the lads I was very proud."

"The game tomorrow will be approached like every game. We will work hard and fight for every ball. We have quality to go and cause problems in every game and we will again look to do that tomorrow."