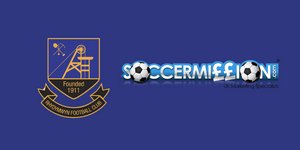 Rhydymwyn FC has announced a new club sponsor for the 2020/21 season after agreeing a partnership deal with sports marketing brand Soccermillion.

The sponsorship, which will see Soccermillion feature regularly in the club's media output, and also as a logo sponsor on the first team's official tracksuits.

Soccermillion is a prolific supporter of the non-league game in Wales, with Rhydymwyn joining a series of North Wales clubs to work with the team.

Co-manager Anthony Weaver said: "A big welcome to Soccermillion as a new club sponsor for the season, and we're really excited to see this partnership get going.

"It's a great boost to have them come on board as a partner that understands this level of the game really well, and wants to see clubs like us grow and develop."

Co-manager Jordan Parry added: "We're delighted to see Soccermillion coming on board at the club at a really exciting time for all of us at Rhydymwyn.

"We've made plenty of progress on the pitch, but it's just as important to do the same off it, and securing this sponsorship means we can continue on with our plans for growth.