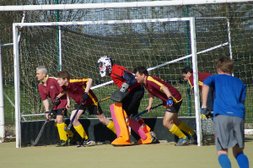 A winning October for Men's 1s

Ricky 1's arrived for their mid-afternoon match at RMS looking to carry on with the 100% start to the season which had seen them win their first 5 games. Luckily the clouds parted, and the sun shone as the 2.30 pushback neared. The formation was much like recent games but with a slight tweak from captain Pendered allowing Harry Bird some more freedom to move forward.

The game started fairly evenly with Ricky making their usual solid start and finding the Hertford keeper in good form from their early chances. Ricky were also transitioning the ball well around the pitch but unfortunately came unstuck from a misplaced pass which led Hertford to a quick break and opening goal. However, Ricky immediately hit back with a sweeping move of their own and superb finish from their international signing Richard van Zyl.

More good passages of play followed with Jasper Cameron comfortably fitting in after moving up from the 3's. The short corner count for Rickmansworth was also good but they were unable to capitalise on the opportunities. The first half drew to a close with Ricky having to defend a short corner just as the umpires blew for half time. However, the slightly younger member of the back-line Matthew Hodgart used his skills and pace to shut off the Hertford corner and the half time whistle blew. Captain Pendered was happy at half time but willed his players on to give their all in the 2nd half to maintain their unbeaten record.

With the inspired team talk Ricky started the half well with some very good chances which were well saved again by the Hertford keeper. However, around 15 mins in Graeme "Rambo" Ramsay ghosted into the "D" unmarked, picked the ball up and using his years of experience calmly slotted the ball into the net over the advancing keeper. From that point on Ricky controlled the game very well with Alexander Poole carry out his defensive duties to the tee and keeping the Hertford right half quiet. The defence also held up well and dealt with the short corners well with Matt "the hat" Stray leading his team with confidence from the back. With a final flourish of pressure the Hertford keeper made an error by kicking the ball to Richard van Zyl inside the "D" who finished confidently with a strong shot into the roof of the net.

The final whistle followed shortly after leaving Ricky 6 for 6 going into the enforced lockdown break of 4 weeks.