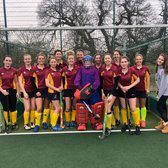 Ladies 1s fail to match performance of their opening game

By DOTD and MOTM Lexie Cinelli

After a fantastic opening game, we went in with the hope of matching last week's performance and come away with a win. As the game got underway it was clear this wouldn't be the case.

With many injuries which made it problematic with only 11 players, with Beth almost breaking her thumb and Amy’s toe, some of the game was played with 10, making our trip to Luton a struggle. We had some good passing and moving up the pitch, and some excellent defensive play. However, Luton were quick on the ball, and due to us leaving gaps in the middle they were able to go 2 up mid way through the first half. We did manage to secure a goal back, making it 2-1 at half time.

We wanted to get the first goal in the 2nd half and knew we could get at least a point from the game. Despite some better play, chances and passing, we were no match for Luton. It ended up being 5-1, but all ended well with teas and cake to celebrate Amy's birthday.

With some great play at the back, Lexie (myself) was given MOTM. I was also awarded DOTD for turning up in a blazer (I couldn't find my jumper).

Here's to next week.