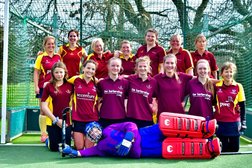 Ladies 2s unlucky not to grab a win

Despite the forecast of rain, the mighty 2s turned out in force for today’s game against Stevenage. Before the game had even started there were issues; a defeated Andrea after England’s poor World Cup performance, and an injured Boxall (whom we are eagerly awaiting the return of). In spite of all these hurdles we were determined to play a great game of hockey. The game started well with Andrea and Katie making great runs up the middle along with Anna and Gaby supporting well in midfield. Stevenage however were not an awful team, and even with our best attempts they managed to get the ball and head towards goal. But with the strong back stick of Lorri in defence and the fast legs of Katie Boxall – who plays everywhere and anywhere – they too were struggling to score any goals. By the end of the first quarter it was still 0-0.

As the second quarter began, my lungs decided to give up on me (despite very little running on my part) and I was grateful to be subbed for the amazing 2s captain Penny. Whilst I was off, the game was at gridlock with both teams struggling to get a goal. I took this great opportunity to chat to Jess, Amy, Chris and Bernice, the wonderful 1s members who had come to watch us play. During this time the 2s had some great opportunities being awarded short corner after short corner. There were some amazing strikes from Andrea at Top D as well as some great chances for Katie and Penny, but it seemed that the fates had decided that today would not be their day. As we won our third short corner in the last 10 minutes I heard Jess Martin say, “It was absolutely tipping it down with rain this morning, wasn’t it Bernice” and at that moment she jinxed it for the rest of the day – possibly even the year.

The heavens opened and a quantity of rain similar to that of the Amazon fell from the sky. Being the forward thinking, intelligent person that I am, I had forgotten to bring any form of coat or shelter with me. And so, the only logical solution was to steal Caroline Boxall’s hoodie for the remained of the quarter to hide from the down pore.

Our half time team talk is always filled with wonderful new ideas and encouragement for the team, but most importantly Penny brings Jelly Babies. Whilst sorting out positions for the remained of the game I am blindsided as someone suggest that I go in Midfield!! Thinking quickly on my feet to avoid the large amount of running which was staring me in the face I suggested that Lauren take my place, so that I could return to the safety of goal hanging up-front.

As the third quarter began, we got off to a good start with some wonderful runs from Andrea, Katie, Anna and Lauren. Keeping the ball mostly in our attacking half we managed to win a few short corners and had some good attempts on goal. Then the hits came thick and fast highlighting why I today am writing this match report. I am used to injecting the ball for shorts and I thought I was okay at it. But not today, being blown up three times for double hitting the ball. This meant I had to adapt my strategy and start sweeping the ball, delivering some of the bobbliest passes to Andrea and Katie at Top D. Then the worst of the worst happened. A fantastic strike from Katie at top D, the ball whizzed towards the goal at the speed of lighting, finally a goal to break this endless stalemate. However, it was not the backboard the ball hit, instead it was my foot hovering precariously on the goal line. No goal and still 0-0 thanks to yours truly.

The final quarter displayed some amazing runs taking place on all sides, and some great skill by Katie in the middle. We won short corner after short corner, but what we didn’t win were any goals. Stevenage had a few break aways, but ultimately our good set up and the strong defensive backbone of Lorri, Ellie and Sara were too much for them. Final score 0-0, player of the match Lorri, and your wonderful match report written by everyone favourite Donkey (barr Andrea) Ellis x