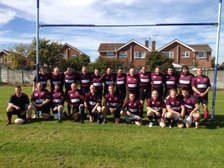 A younger, fitter and classier Matlock 3rds gave Rhinos a tough game in the mud at Cromford Meadows.

Ripley faced a tough start to 2014 with a trip to free-scoring Matlock 3rds on a muddy but playable Cromford Meadows surface.

The team were delighted to welcome skipper Will Evans back for his first game of the campaign at fly half and 65 year old Peter Kay strapping on his boots again in the second row. Evans' side had another Barbarian feel to it but were still one short after morning drop-outs; with Mat Boulton kindly stepping across from their hosts.

The maroons began the brighter of the two sides and put their hosts under pressure for the first ten minutes but lacked precision in the lineouts they gained to turn this into anything substantive. The scrum looked solid with props Craig Culshaw and Shaun Chapman looking solid and stand-in hooker Adam Chawner doing well. Matlock defended well, tackled hard and had pace to cover any potential breaks.

A nightmare twenty minutes then ensued for Ripley as Matlock broke through and exposed a lack of tackling throughout the visitor ranks. Winger Adam Walker covered superbly but it only took a couple of phase for Matlock top expose Ripley's ageing side and create straightforward overlaps to exploit. Four tries quickly followed and the maroons could at least be thankful that their hosts hadn't packed their kicking boots as conversions went wide.

The evergreen Jon Doughty led his side with some strong tackles with second row Richard Pearson and centre Owen Gregory making seemly interventions to nullify Matlock's pace and verve on the hoof but it was only delaying Matlock and they scored twice more before the interval. Doughty also took a yellow card for his troubles as his team failed to re-organise in defence.

In truth, the game was gone at half time and Evans was keen to accentuate the positive and concentrate on what Ripley could do well in the second half. The second period began as the first had left off but this team the maroons were up to the challenge with the returning Doughty, Pearson, No. 8 Zeique Robinson and especially prop Chapman making crunching tackles. Matlock were held up and kept out for phase after phase. In this time, a little of the Rhino self-belief returned. Matlock were too strong, too fit to be held out for the whole half and scored but Ripley made them work harder for their scores.

Ripley finished as they had begun, ignoring the performance in-between, attacking the Matlock line. Evans led his team but the hosts defended well and succeeded in their desire to nil the visitors.

It was a tough game for Ripley. Matlock were fitter, better drilled and had more class. Rhinos could take the positive of their start to the second half but it was still a thumping. Tight head Shaun Chapman tackled and scrummaged like a demon and deservedly took the BAB Plumbing & Heating man of the match award from his team.

Ripley will look to their likely squad playing numbers this week before deciding whether to enter the fixture pool for a game.

WE WILL BE IN THE MAROON KIT WITH SHORTS & SOCKS.

REMINDER - as voted unanimously by you at the AGM - Match Tax is £7/£5 depending if you are a fully paid member (discounts for unwaged, anyone can talk to their captain beforehand if struggling that week). Match tax to be charged on sliding scale per minutes played of game. Match tax is to be collected BEFORE the game and then paid back where appropriate afterwards.