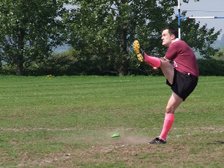 Rhinos join the celebrations as Tupton open their new ground

Rhinos were honoured to accept Tupton's invitation to join them in the opening of their impressive new clubhouse facilities. With Ripley ending their playing days in May, this was a fitting game against opponents who, across the 19 seasons of Rhino rugby, the maroons had shared enmity, tragedy and fun with. And who were the runners-up in Ripley's successful cup final campaign of four years ago.

Skipper Will Evans pulled out the stops to find a full side of players donning the maroon for the lunchtime kick off; so well in fact he realised he had one extra player and donned the substitutes jersey with prop Craig Culshaw talking over the reins. With the sun shining and the Rhino emblazoned on their chests again the visitor team were keen to play a full part in the celebration game in front of a healthy crowd at the Recreation Ground.

The lack of training and playing time together showed early on, with Rhinos looking rusty. Strong carries and cover defence by returning scrum half Dan Hardy provided resistance to the powerful running of the hosts but an opening try was inevitable. Despite struggling to keep hold of the very dry ball on several occasions Tupton duly did open the scoring, touching down close to the posts to enable a simple conversion. Undeterred Rhinos focused on gaining territory with back row Simon Brown and a resurgent Carl Whitely leading carries into the opposition 22 but with greater rewards beckoning, Rhinos turned over possession too many times, allowing Tupton to begin adding to their try tally.

Rhinos were sticking to a plan of moving the ball quickly and keeping enjoyment in the game, although it was a more prosaic penalty kick at goal that allowed them to register their first points on the game, fly half Liam Porter notching a fine kick.

With a foothold in the game Rhinos were buoyed and looked for more. In the face of more points from Tupton, Rhinos tapped a quick penalty and headed for the corner with Lee Brant coming up with the score, Porter adding the extras.

As the first half drew towards the close, Rhinos put together one of the best pieces of handling all afternoon; a quick tap penalty saw the initial break and as the ball was spread across the pitch, winger Luke Thompson timed his support run to perfection to take the pop pass, open his legs, show his class and hand off the would-be tackler for a great score in the corner. Despite being behind on the scoreboard Rhinos had come together well and were now playing some enjoyable and impressive rugby. The half time talk was for more of the same, with particular focus on enjoyment, both for Rhinos and an expectant crowd.

Both sides continued to play in the same vein as the second half got underway. Ripley were by now showing some coherence, although the additional recent playing experience of the hosts ensured that they had the upper hand for large periods of the game.

Having warmed up across the pitch, Rhinos' defence was now looking more solid, with a higher success rate in tackles, even against some sizeable opponents. At full back Mark Parkin was making a valiant effort to stop many incursions towards the line, with centre Adam Parr getting through a good deal of work in support.

Ripley managed to spend periods of time inside the opposition 22 throughout the second half, picking up an intercept try from Evans, which was duly converted by Porter.

Despite the best efforts of Evans, Rhinos also established two much vaunted 14-man line-outs, which in turn very nearly resulted in tries for both teams.

Although Tupton added regularly to their own total, the last word went to Ripley with a try under posts from Matt Ledger. The conversion was added by Evans from under the nose of Culshaw to leave the final score 60-29 to the hosts.

This was a fine display of what has made Ripley Rhino rugby so enjoyable over many years and why Tupton were keen to involve the maroons in this celebration. Rugby came away the winner, although Tupton and their new facilities were a fine second. All at Rhinos wish them well in their new home.

Prop and part-time captain Craig Culshaw won the BAB Plumbing & Heating man of the match award from his team mates. Ripley will hope to take this expansive game of enjoyable rugby into their final game; a midweek friendly against local rivals Belper once the black and whites have negotiated their three cup finals.

MATCH REPORT written by WILL EVANS