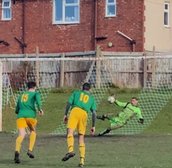 Rockpoint today were the hosts of plccfc at the stade de Rycroft.
After last weeks draw at jasga the lads where chomping at the bit to put a few things right.
We had to make a few changes to the squad as players were missing due to different reasons but the depth we have in quality allows us to carry on regardless.
The game kicked off and Rockpoint started really well and went close a few times before a long diagonal ball caught them out and parkfields striker slotted the ball home to give them a 1 nil lead against the run of play. 0-1.
Rockpoint as per usual going a goal down decided to start to play more direct football and it was from a long ball out wide to jonny pom that the equalizer came as he played the ball into Josh and his touch took the ball beyond the despairing dive of the keeper 1-1.
It wasn't long before Rockpoint took the lead though as a shot from Josh was saved by the keeper and Paul Williams was there to slot the ball into the net 2-1.
Parkfield still posed a threat and escaped down the left wing forcing nibbsy into a smart save preventing the scores from being level. Rockpoint then went up the other end and jonny pom got another assist as he squared the ball for the onrushing Kyle Bennett to slam home from just inside the box 3-1. halftime.

The second half started and Rockpoint went close in the opening seconds as Josh forced the keeper into a good save.
It wasn't long though and in the space of 10 minutes Josh had completed his hat-trick with 2 smart finishes again with jonny pom the provider with great through balls 5-1. To parkfields credit they continued to push forward and went close as nibbsy was forced into yet another vital stop as he tipped the ball onto the post then used his eye to clear the ball ?.
nibbsy was kept busy in the last 10 minutes and when parkfield were awarded a penalty nibbsy pulled of a cracking one handed stop (see the photo at the top ). Only an error near the end made the scoreline look more respectable as the winger pounced to finish neatly in the bottom left hand corner 5-2 full time.

Like I said earlier we used the depth of our squad today and everyone played quality and has given the gaffa even more headaches than before with selection picking for future games. thanks for the hard work and effort. UTFRP.