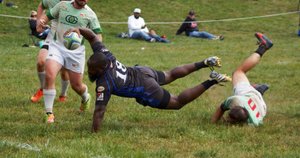 In the battle of Mid-Atlantic Champions, Gorge stays undefeated with 44-26 over Washington Irish.

In Columbia, Md., the champions of DI and DII in the Mid-Atlantic renewed an old rivalry as Rocky Gorge clashed with the Washington Irish. When the final whistle blew, the experience and skill of Gorge beat out the youth and exuberance of the Irish to win 44-26.

Gorge took the early lead with a Nick Kuhl penalty kick and tries from Matias Cima and Will Miller. The Irish's Jager Hill answered at 21’ to make it 15-7, but outside center Erik Tack punched one in right before halftime to give the home team the 22-7 lead at the break.

Prop Tonato Ayigah extended the lead with a try six minutes into the second half, but Irish fought back with a converted Mike Fletcher try to make it 27-14. Cima notched his second at 52’ and reserve Kevin Jackson Jr.’s spike try at 60’ made it 39-14 to pretty much end this one in Gorge’s favor. Irish fought back with two tries in the final 12 minutes, but the home team tacked on another for good measure.

It was once again the Rocky Gorge reserves that provided the leg up. “We’ve always put a huge emphasis on a strong bench," Gorge coach Nick DiMichele explained. "Our 16-23 is what sets us apart. Kevin Jackson was our man of the match; he played thirty minutes and had a huge impact. Irish was quick off the line and a very physical team. We just kept our composure and maintained possession for most of the game. We did a good job putting phases together to wear them down but didn’t exploit the overloads when the opportunity was there. Plenty of work to do and we’ll need to execute on the road the next two weeks.