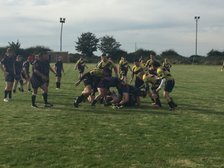 Rossington Loose out in 9 Try Thriller

The Hornets travelled to league new boys Withernsea with one thing on their minds, to fetch vital points back with them. Things did not get off to a good start however as Withernsea ran over their first try within 10 minutes of the kick off. Things went from bad to worse for the Hornets when Dean Brown suffered a horrendous injury, stretchered off and sent to hospital is was found he suffered a broken fibula and will require surgery. Down a man the Hornets wanted something to show for the day and wanted to get back on terms. After going behind further, Scott Johnson ran over the first try for the Hornets, Kai Wheatley converting. After the break things got better for the Hornets, with Giles Wilson getting his name on the score sheet with a strong run through the centre of the park, Kai Wheatley converting again. Some end to end rugby followed culminating in John Richardson with a rapid burst of pace to put him clear, Kai again converting. The final try was scored by Scott Johnson, converted by Kai, maintaining his 100% record for the day. With 10 minutes to go the Hornets were awarded a penalty, Kai’s nerves held for him to put the Hornets 31-29 up. With the last 5 minutes Withernsea switched back on and ran over a try and conversion to sadly close the proceeding 36-31. For his efforts on and off the ball John Richardson was awarded the man of the match award for the Hornets

Hopefully Dean Brown’s recovery is a quick one and he can come back stronger than ever.