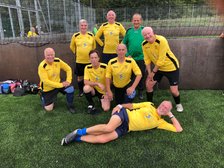 ‘Matt set us up in a 2-1-2 formation in all games, which worked very well, as we did spread the play, got balls out wide and, in all games bar one, created a number of goal-scoring opportunities. For the record, the results went like this:

Abingdon B: Draw 1-1 (Gareth) – a good start with a well-worked goal coming in from the right wing. Looked like we were going to hold on until we let in a soft one towards the end.
Swindon: Lost 0-5 – the best team we played, who pulled us all over the place with some very good passing and movement, and several fiercely struck goals and a couple of soft ones. We didn’t have the right players in the rights places. Created very little in this frustrating game.
Reading (Rivermead): Won 1-0 (Tudor) – our best performance, battled well and created several chances, typical Tudor goal bludgeoning his way through the centre to blast one past the otherwise excellent Reading stopper.
Witney: Lost 0-2 – again we played well against the eventual finalists, and kept the score line down whilst still creating one or two chances.
Abingdon A: Lost 1-5 (Graham) – slightly disappointing against the eventual winners, two goals down very early, but got stuck in well and managed to create a few chances, including a well-struck daisy-cutter from Graham that crept into the corner beyond the despairing dive of the otherwise outstanding keeper. We were competing well but rather undeservedly conceded three late goals, the usual mix of a blinder or two and a soft one.

Thame: Draw 1-1 (Matt) – a disappointing end to the round-robin, as Thame were by far the weaker team in the tournament, but received the biggest cheer of the day when Matt accidentally diverted a hopeful punt past a bemused Martin in goal, for their one and only goal of the tournament. After that we dominated and had goal-scoring opportunity after opportunity, but only a nice drive from Matt to show for our efforts. Should really have won this very comfortably.

As a result we finished 5th in the round-robin table, which progressed us to the Plate competition.
Plate final vs Reading. Lost 0-3. A disappointing game as we found ourselves 2 down within the first minute, with a couple of soft goals again, resulting from misplaced passes at the back and poor covering. After that it was a fairly even contest, although we didn’t create too many clear-cut chances for the excellent Reading keeper to deal with. The game was marred by Matt and their lofty, mustachioed midfielder getting sin-binned for a needless hand-bags moment! Reading spurned a number of good chances, including a missed penalty, before wrapping things up with a wondrous goal from way out on the left touch-line that flew in to the far post netting.

Overall we did OK. Perhaps we should have won the two drawn games and done much better in the Plate final. Either way it was an enjoyable day. We competed well in all games bar one really, and I think the main differences between us on the top sides were that they had several players with good composure on the ball, they could control it, keep it and wait until picking a good pass. Although we were in the games, we were just a bit too frenetic in our play. They also had players who could strike a good ball from distance, which we didn’t often manage to do. We were also very quiet, with not much calling on the pitch, despite frequently telling ourselves to do it (where was Dave when we needed him!!).

Thanks go to Matt for organising the teams and picking the sides and also to Martin for looking after the kit and “volunteering” to play in goal for all games bar one where James stepped in!!.’

Thanks to Graham for the report!