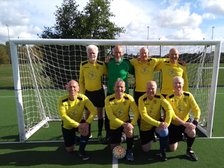 Having reached the semi finals of this tournament last year hopes were high for a successful day in unseasonably warm weather. Twelve teams were divided into two leagues with winners and runners up in each league progressing to the semi finals.
We elected to play in a 2:2:1 formation spearheaded by Tudor in attack, supported from midfield by Mike B and Dave. Andy T, Graham H, Ian and John C rotated defensive duties with Steve in goal.
Match synopsis as follows;

1) Rotherfield 0 - 1 Milton Keynes Mad Walkers
We were perhaps too tentative in this game as the system bedded in. With Tudor coming deep to pick up the ball, the midfield got very congested and we struggled to create chances against a frail looking goalkeeper. At the other end Steve had to be on his mettle to keep out a number of clear cut opportunities. A draw, at the time, felt like a decent result, but with hindsight had we created more chances this was a game we should have won.

2) Rotherfield 1 - 1 Wycombe Front Runners
We decided to push Tudor further forward to put more pressure on their defence and create more space in midfield. This paid dividends as we took an early lead from an excellent breakaway goal from Tudor. We controlled the game and were unfortunate to concede late on from a corner which deflected off John past a stranded Steve for an own goal.

3) Rotherfield 0 - 1 Bracknell
Bracknell are well known to us! They are a large, well established club with a big squad so we knew this was going to be a tough game. We competed well with tight defending and some decent chances created by Dave & Mike who supported Tudor well. The game was decided by a shot which sneaked past Steve at his near post. Such were the fine margins by which so many of these games were decided!

4) Rotherfield 0 - 0 Woodley Saints Dead Beats
Refreshed by tea and cake, we started this game with renewed confidence!This was a tight, niggly affair disrupted by some very pedantic refereeing. Very few chances were created by either side. By this time we had settled into a settled system and were passing the ball around well. The substitutions were working well and Graham, John, Andy & Ian were rotating effectively to provide great cover to the keeper as well as support for the midfield and attack. The result really could have gone either way.

5) Rotherfield 0 - 1 Highworth
Highworth were an unknown quantity but it soon became apparent that this was a very mobile, skillful and well organised group! We were well up for it and were determined to try to force a win to seal off the day. We competed well against opponents that were prepared to shoot on sight. Graham, Mike, John, Andy & Ian all put their bodies on the line to block some powerful shots. Mike and Dave linked well with Tudor to create some good chances on the counter attack which were thwarted by their imposing keeper. We were unfortunate to go behind to a scruffy deflected shot from the edge of the area. In the latter stages we had to dig deep after Dave was harshly sin binned for repeatedly running (hard to believe, I know!!). To have competed so well against the eventual winners of the tournament was a very satisfying achievement and all the squad contributed with a real passion and intensity.

Overall it was a well organised event and a very enjoyable day played in the right spirit. It was noticeable that the standard was particularly high with no weak teams and very few weak links in any squads. Across the whole tournament matches were very tight and generally decided by the odd goal. As a squad we continue to learn from competing at this level and certainly more than held our own!

Thanks to Ian for organising and well done to Andy T, Dave,Graham H, Ian, John C, Mike B, Steve & Tudor......the cakes were excellent too and hopefully a lot of money was raised for a very good cause!!