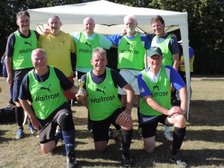 Rotherfield Walking Football Club won their first trophy on Sunday 15th September. They hosted a Charity Tournament with 3 other invited clubs, Chalgrove, Tilehurst & Rivermead at Bishopswood Sports Ground. This was the clubs first venture in hosting such an event. On an unusually hot September afternoon Rotherfield ran out winners, beating Rivermead in the final 1-0. The event was part of a Memorial tournament organised every year by the family and friends of Joshua Smith who died aged 19 near Sonning Common in 2013.The tournament aimed to raise money for Cancer Research UK and Mind

“We wanted to contribute to the annual tournament by offering a small manageable event which encouraged active participation of an older age range. It was a great success with nearly 35 players, mostly over 60 turning up to participate in the fund raising with each club playing four 15-minute games plus a final. We were pleased with the result not just because we won the trophy but for the level of support from other clubs and our contribution to the raising of £400.”

Team captain Mike Bowker, “The Rotherfield team really excelled. We came top of the league placing's with three wins and one draw followed by the victory in the final. The team consisting of 6 players and two subs, in rotation, all played their part. Tudor Taylor (6 goals) and Roger Prismall (2 goals) enabled the victories, while the defence was a brick wall, conceding no goals. It was an almost flawless performance”