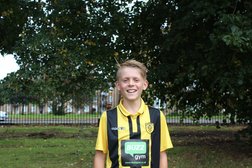 What a great game of football!

Top of the table clash ends in stalemate but only half the story!

Rotherfield United U12 Bees and Wokingham shared the spoils on Saturday in a terrific match! Although no goals, the Bees produced some fine football - passing out of trouble, confident in possession and rising to the battle when needed.

With only 5 minutes gone, top scorer Ellis Walker had to limp off with an injured knee. Joe Norris came on and the team needed to reshuffle but continued to work well and were the dominant team in the first half.

More changes at half time, made to see if the Bees could unlock a solid Wokingham defence. However, it was Wokingham who started to grow into the game and asked questions of a Bees defence who have only let in 4 goals all season ( 3 in the first game!). Arnar Davenport, Oliver Matthews and Charlie Partlow were all solid, backed up by man of the moment, Bill Bowley, who produced the moment of the game. With only 5 minutes to go Wokingham stabbed the ball towards the goal, their striker started to celebrate but Bowley produced an amazing and brave clearance off the line.

The match finished 0-0 which was probably the right result. Stand-out performances this week was from the whole team but special mention to Rhys Beaumont with another flawless display and Effort Award winner Ashley Field, who was the heartbeat of all that was good in this tight match!