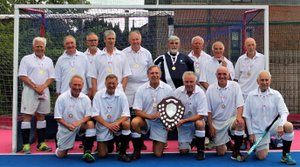 RHC had representation in the winning squad for the Hockey National Regional Finals held over 2 days at Abbeydale.

The North walked away Champions after an impressive set of results:

The tournament winning goal coming in the last minute of the last game where the North needed a draw or a win to be crowned champions.

Congratulations to Ian (center right holding shield) and the rest of the squad.