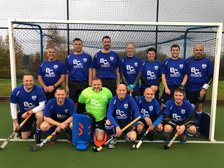 The first match was played on Sunday but RHC were narrowly beaten 1-2 by the current Yorkshire Masters champions Harrogate.
Going into the game with not much expectation due to the majority of the team not having played any competitive hockey for a number of years Rotherham found themselves 2-0 down in the first 20 minutes to two well drilled and taken short corners.
At half time club legends Peter Hucknall and Jon Bray, Captain and coach respectively urged the team to continue playing how they had been and the chances would come.
In the second half it was all Rotherham just limiting Harrogate to the occasional half chance but couldn't find the back of the net until less than five minutes to go when Andy Burgin converted a two yard tap in and Harrogate managed to hang on to claim victory.
Captain Peter Hucknall said after the game " Given the amount of hockey most of the boys had played and the first time we've played together, the performance was outstanding. The Harrogate goalkeeper made a string of fine saves to keep the score line to what it was and given the amount of masters hockey experience they have, they can consider themselves fortunate to come away with the result. I think the lack of sharpness in the D showed itself but I cannot take anything away from the performance of the whole team."
Rotherham now go into the Tier 3 competition with the first round to be played on Sunday December 8th. The Masters now await to see who they face in the next round.