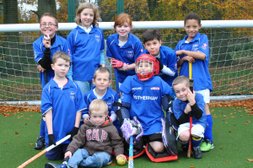 All started promising in the first game with a 1-0 win over York, despite our domination of the game. The winning goal came courtesy of a free hit in the attacking half and a quick self pass taken by Ethan Barron, driving into the far side of the circle for a driven cross for Elliot Womack to slap in from the centre of the circle…(thanks to Neil, Elliot’s dad for the £5 donation for the goal and also the £1 for a clean sheet for the family).

The second game saw us fight out a 0-0 with Airedale. Again, Rotherham created plenty of chances but they were unable to convert the pressure. A loss of shape during the game saw us give possession away in key areas, but thanks to the work of Jessica and Georgia at the back and a few expert saves from Alex we kept the opposition out.

Then came the big test against a stronger and older Wakefield team that were scoring goals for fun. Unfortunately, the game ended 0-7.

In the final game we were against the local rivals Sheffield… finally going down 0-2.
Yet again we probably create more of the clear chances with Ethan going close on numerous occasions.

Good performances also from Conner and Kelvin who get better every session and Jake (who was struggling a little in the cold air).
Little Aidan also played his part in the day with a few crunching tackles in the earlier games.

Overall a good performance against bigger and older opposition. Great to see the team using the self pass rule to effect.