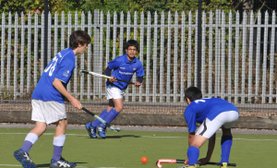 U16's tough start to the season

The Boys Under 16s commenced their Yorkshire Youth League season with a very difficult first session at Hull against Doncaster, Sheffield and York who all made last season league playoff finals with York being crowned County Champions.

We were also without their influential Captain Andy Bray who suffered a fractured collarbone whilst playing 2 weeks ago but this enabled us to give league debuts to Tom Bradley, Oliver De Roeck and newcomer Tim Foulds.

In the first game against a strong Doncaster team we controlled most of the game but found ourselves behind to a Doncaster counter attack. Undaunted, we continued to press for an equaliser which came from Tom Sorsby with well worked penalty corner deflection from the final hit of the game.

Next up was another local derby against Sheffield and in the best game of the day with the scoreline changing hands on several occasions, we came out victors 3-2 with the goals from Jacob Maxwell, Matt Woodcock-Fowles and Nicky Desoysa.

The final game of the day against York, who had earlier beaten Sheffield and drew with Doncaster, was another end to end affair but York's more clinical finishing was the difference between the two teams as they went on to win 3-1 with Foulds scoring Rotherham's consolation goal.