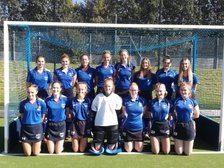 Ladies Encounter Their Toughest Opposition Yet!

Saturday saw Rotherham Ladies 1st XI return home to face Leeds Adel Ladies 1st XI. The home supporters were out in force again and the ladies set out determined to find that first goal and to further demonstrate their growth as a team.

The Rotherham push-back led to an early period of home side possession; Nairne Clark and Olivia Clough combining well with the central midfielders to advance play into the opposition half. Issy Watts showed great strength and determination down the left side with her surrounding teammates working hard to support her.

Leeds Adel were the strongest side the ladies have faced to date; their well-worked short corners and neat deflections at the far post leaving the Rotherham defence and goalkeeper stranded on too many occasions. Half-time score 0-4.

A last minute defensive reshuffle at half-time saw Kate Burgin drop back into central defence, where she deservedly earned the team's Player of the Match votes.

The second half found the home side awarded their first short corner of the season. Lucy Hucknall injected to Kate Burgin, who was unfortunately unable to control the ball on this occasion and the attack quickly broke down under Leeds Adel pressure.

Rotherham were able to maintain the 0-4 scoreline for the first 10-15 minutes of the second half, but the slick deflections from Leeds Adel continued in the latter stages of the half and the scoreline gradually crept up to 0-9 by the final whistle.

Although not suggested by this particular scoreline, the Rotherham performance, the strength of individual players and the strength of the team as a whole continues to progressively grow. The significant development noted after just three fixtures makes us all incredibly excited for what the future holds and proud to play a part in it.

And we're all still smiling.

AND ball pace is improving!