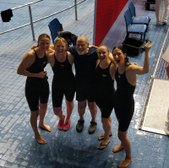 Four RTW Masters ladies swam the race of their lives to take gold at this year’s SE Masters National Championships in Sheffield, in the 4x200m freestyle relay.
Ali Wain, Alice Houghton-Rose, Del Jenkins and Liz Price recorded a time of ten minutes and three seconds, giving RTW Masters one of three gold medals of the tournament.
The event took place from 26-28 October at Ponds Forge, with 14 swimmers competing from the Tunbridge Wells club.
The race was on an even par at the halfway stage, before Liz Price took the final leg and clawed her way to the front of the pack, touching the board in first place.
Speaking after the race, Houghton-Rose said: “We have all been training intensively for the nationals over the past year and, to beat an incredible opposition in London-based Spencer Swimming Club, we’ve got to be over the moon with that.
“Liz did fantastic to get the win for us at the end, but we all played our part in making it possible. I’m lost for words. What a feeling.”
Seventy-year-old Jim Pearson claimed the club’s other two golds, setting Kent and club records in the process, in the 50m and 100m freestyle events. A total of ten Kent records were set over the course of three days, along with 13 club records.
There were three bronze medals claimed from other relay teams: the mixed 4x200m 200+ age group medley relay, men’s 4x50m 240+ age group medley relay and men’s 4x100m 240+ age group medley relay.
RTW Masters coach Ted Valder, who will retire at the end of the year, said: “After all these years and all the competitions I’ve been a part of, to see the ladies win a gold the way that they did is brilliant – it’s the icing on the cake for me and I can retire a happy man.
“We’ve done a lot of work to practice our takeovers, which has sometimes let us down in the past, and the girls got it spot on this time. That’s what made it possible.”
Share via
FacebookTwitter
https://www.pitchero.com/clubs
Recent news