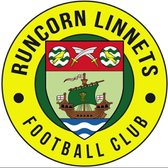 After an absence of a 147 days Runcorn Linnets Ladies returned to the pitch today as members of the North West Woman`s Regional Football league. Opponents Sandbach Utd on the other hand could well be one of the favourites for the Linnets previous Division in the Cheshire Woman`s League.
Manager John Pickering took a squad of 20 players with the majority of last season`s squad intact plus some new and younger faces.
The hosts started brightly and had a couple of early chances which they should of taken advantage of. Because no sooner had they missed them Runcorn struck twice in a minute through Lile Ashley and a Chelsea Gillies penalty. Sandbach caused the Linnets rear-guard a few problems with the long ball as the new centre half pairing took time to find their rhythm. Much of the first half was a procession of missed chances before Ashley at the second attempt from a Jess Bazley cross made it 3-0. On 43 minutes Becky Barker back in midfield capitalised on a Sandbach clearance to rifle an unstoppable shot past the home keeper.

Before you could blink at the start of the second half a move involving Amy Kelly and Marcia Jones-Sacharewicz fed Lucy Wieland for number 5 then a minute later Jones-Sacharewicz`s trademark I don`t do simple goals made it six.

The home side pulled a goal back from a defensive error by the Linnets before Gillies from inside the box added her second. Sandbach showing a bit more fight now got on the scoresheet again as the second half rained goals. Caitlin Gibbons after spending almost the entire of last season out injured made her mark in her first game back with the games only yellow card on 59 minutes. Having been signed towards the end of last season Laura Jennings in her first appearance scored with virtually her first touch in a Linnets shirt on 62 minutes before further goals from Wieland and Barker completed the scoring.

Manager John Pickering used all 20 players on what was a sweltering afternoon. To score 10 goals was pretty impressive but that takes nothing away from Sandbach who played very well themselves. It wasn`t easy with so many new partnerships in the team but debutante Claire Foote had a solid game at centre half. Young centre halves Beech and Cawley learnt their trade well today. Katie Evans was tigerish and showed a maturity when she was introduced. Ella Clifton-Stringer was immense in her first appearance in a Linnets shirt adding a new dimension down the right linking up with Amy Kelly who had an excellent debut. Laura Jennings work rate closing down from the front was outstanding. As for the rest it was just like they had never been away.

All views are that of the Author and not necessary Runcorn Linnets Ladies.