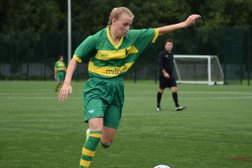 Runcorn Linnets Ladies came crashing down to earth today with a mighty bang. But maybe in their North West Regional development it will turn out to be a good thing going forward.

In what was a disappointing afternoon it wasn`t the score line that mattered it was the way they were suckered in by the experienced higher league home opposition. Tranmere inserted heavy pressure on the Runcorn goal in the first half whilst the Linnets were restricted to a lone Chelsea Gillies free kick. Luck played a big part in the opening goal when a hopeful cross from right hit the back post and rolled to only Tranmere player in the box dissecting all the Linnets defence.
The game changed on 22 minutes when something that look nothing more than handbags resulted in a straight red for Runcorn`s Beth Graham and a yellow card for the home player. By the letter of the law violent conduct was the correct decision taken by the referee.
With the Linnets already forced to play top striker Lile Ashley at centre half a quick substitution and reshuffle was needed to counter the imbalance between the sides, Captain Becky Barker was withdrawn with Katie Evans filling in the vacant right back position.
The extra player eventually telling as Tranmere went further ahead on 28 minutes from a speculative shot from outside the box.
Becky Barker returned for Claire Foote with Chelsea Gilles taking up a position in the back 4 to tighten up and add some pace

As is the case when a team goes down to 10 it seems to spur them on and Runcorn started the brighter in the second half with the first shot of the second period. Sometimes decisions even themselves up in football but it was not to be this time. On 63 minutes Marcia Jones-Sacharewicz clean through was taken down by the out rushing home keeper who in her momentum handled the ball before realising where she was. The game started with a drop ball to the astonishment of even the home fans and later a Tranmere player afterwards admitted her keeper should have gone.
It was no consolation then when 5 minutes later she pulled off a fantastic save to keep the Linnets out when Jones Sacharewicz was clean through and the keeper tipping over.
With injuries taking 3 key Runcorn players off the park including the only available keeper in Megan Pickering the Linnets finished the game with a back four of one 15 year old and two 16 year olds non of whom had ever played a single Cheshire Woman's League game for the club never mind played against a NWWRFL Premier side.

Manager John Pickering will be angry tonight that his usually well disciplined team let their guard down today and he will seek an immediate response on Thursday both personally and collectively in the next fixture. Five nil against an organised well drilled team with such young players gaining valuable experience at the end is no disgrace, especially in a pre-season friendly.