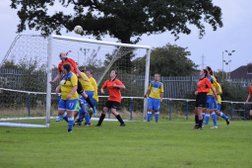 Runcorn Linnets Ladies emerged victors tonight with a hard earned 4-3 win at Ellesmere Port LFC.
In a game divided into three 30 minute periods the Linnets lacked their normal intensity for large periods of the game. The hosts playing a high line had a few early scares as Chelsea Gillies rattled the post on 8 minutes. But it was they who against the run of play opened the scoring on 22 minutes, a static defence allowed the forward time and space outside the box to line a shot that beat Hopley in the Linnets goal dropping over her head.
Almost immediately Chelsea Gillies provided the pass for Ellie Dyson to race through the home defence to equalise slotting coolly past the advancing keeper.
The visitors squandered a host of chances only to gift Ellesmere Port a second goal straight after half time on 46 minutes, another defensive mistake at the back costing the Linnets.
Becky Barker thundered a header from a Lile Ashley corner against the bar on 51 minutes before Laura Jennings equalised on the hour from a Lile Ashley inch perfect pass.
With the home side pushing more players forward it opened the game up for Runcorn who made better use of the flanks in the final third. Jess Bazley weaved her way through the Port defence to put Runcorn ahead for the first time 14 minutes from the end, credit has to go to Ella Clifton-Stringer who played the ball from defence up to midfield and put the ball perfectly into the space for Bazley to go on her run. But once again yet another mistake at the back 2 minutes later cost the Linnets dearly, Hopley trying to play out from the back added far to much weight to her pass the ball bouncing off Lily Clifton Stringer into the path of the Port forward, hitting her shot first time catching a frustrated Hopley out of position for 3-3
Runcorn going forward created chance after chance and should have been out of site, the winner came from a cross from the right wing, young Ella Clifton-Stringer played the ball from one side to the other on 82 minutes as Demi Lee Rogers at the back of the box hit a shot that beat the keeper at the near corner.

Manager John Pickering and Coach Lee Buckley will have mixed fortunes tonight. A win is a win but Runcorn need to convert a bigger percentage of the chances they create. if they had tonight the score line would of been a lot wider. Defensively too many mistakes at the back are costing the team dear at the moment. Lily Clifton-Stringer could be the find of the season after her accomplished first appearance in a linnets shirt. Once again the younger players seemed more at home than some of the experienced players and some positions are still up for grabs. Anybody who asserts themselves in the coming weeks will surely take those positions. As for Ellesmere Port they played some good football and will win more than they lose in their respected Division but they may want to consider dropping using a high line though.
All views are that of the Author and not necessary those of Runcorn Linnets Ladies.