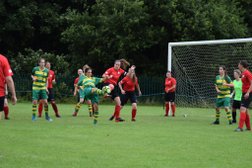 In what was a strikingly contrasting performance by the Linnets from Thursday night`s win over Ellesmere Port. Runcorn Linnets Ladies avenged the 3-1 defeat in last seasons curtailed Cheshire FA County Cup by the same margin today. Megan Pickering returned in goal with Beth Middleton taking up the centre half position in her first pre season appearance. Manager John Pickering keeping faith with his two young players Katie Evans and Lile Clifton-Stringer in a back four complimented by Ellie Isherwood.
The Vixens put in the first dangerous cross of the game but the Northwich striker sent her shot well wide.
The game took on a cup tie style feel with the Linnets content to thread their way forward whilst the Vixens opted for a more direct fast approach.
Northwich hit the post in similar circumstances to Tranmere 7 days ago only this time the ball rolled to the Runcorn defence who quickly cleared their lines. Ellie Dyson could possibly have opened the scoring from a free header on 19 minutes but she put the chance over.
Lile Ashley put the Linnets a goal up scoring direct from a corner a minute later as the Vixens defence could do nothing about it the well paced set piece routine.
Five minutes later Ashley added hers and the Linnets second of the afternoon, Dyson brought down outside of the box right of goal, Ashley's direct free kick was perfectly placed giving the keeper no chance. Northwich were still dangerous and not out of the game the Linnets indebted to Megan Pickering who raced out to meet a Vixens forward and showed the kind of determination her Manager expects of his players by getting a second challenge in after the initial first ricochet.

With Northwich attacking with the slope now the Runcorn defence knew this could be a long 45 minutes. The Vixens exerting tremendous pressure at the start of the second half. They were rewarded with a penalty on 47 minutes, match official Mr. Miller adjudging Lily Clifton-Stringer has pushed her player in the back but Megan Pickering saved the resultant spot kick low down to her left.
On 55 minutes Northwich were awarded a second spot kick of the afternoon, Lily Clifton-Stringer catching the Vixens forward as she burst into the box, this time the Vixens forward made made no mistake and game on at 2-1.
Runcorn showed character to hit back straight away as Marcia Jones-Sacharewicz weaved inside the box before beating the unsighted keeper on 61 minutes to restore the home sides 2 goal advantage.
Dyson saw a shot rise just over the bar and Laura Jennings opted to pass when the shot was on for herself.
The Vixens in the mean time forced a string of corners at the other end before Jones-Sacharewicz was a whisker away from her second, the Vixens keeper standing tall and making the save in a one v one, at the other end the Vixens were also a whisker away from reducing the arrears

Down the years the Linnets have put in some great performances when needed. Mossley Hill, Cammell Lairds, Altrincham are just a few that come to mind and whilst only a friendly today this would rank up there with them. The whole squad deserves the POM award from those that played to those than didn`t but cheered their team mates on from the side-lines, it shows the team spirit and the togetherness the Manager has built already this pre-season.
Beth Middleton looked like she was making her 100th Centre half appearance not her first. The engine room of Gillies and Bazley was immense but credit to Beth Graham who`s football world collapsed 7 days ago she took her punishment and for the 45 minutes she was on the pitch today she was enormous.
All views are that of the Author and not necessary Runcorn Linnets FC