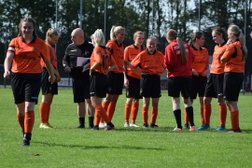 In a match that kicked off at 12 noon the Linnets scored an avalanche of goals today in a comfortable 11-3 win at Egerton LFC.
In a rather one way first half. Becky Barker opened the scoring in the first minute from inside the box, Lile Ashley with the assist.
Four minutes later the Linnets went further ahead Ashley making no mistake from a delightful Demi Rogers pass from the left.
Egerton apart from the regular long ball from the keeper trying to catch out the impressive central defensive partnership of Beth Middleton and Emma McLarney were virtually encamped in their own half, Runcorn using bith sides of the pitch passed the ball well and were patient in the build-up play
The Barker/Ashley combination was to become a thorn in Egerton`s side throughout the first half with further goals in the 19th and 23rd minute, Barker`s second on 19 minutes was as good a goal as you will see anywhere, Lile Ashley when on form is unplayable, again the hard working forward played the ball from left to right into the box, Barker had a lot to do, taking the ball down with her left foot, turned and half-volleyed past the keeper for an amazing goal. Barker completed her hatrick in the 23rfd minute again Ashley the provider for a 4-0 lead
A minute later Runcorn were 5-0 up, Ashley again causing mayhem inside the Egerton box was scythed down, up stepped Chelsea Gillies who despatched the resultant penalty.
Egerton won a free kick on the right side of the box some 20 yards out, the effort curled round the wall rebounded to safety off the post. Egerton wouldn`t lie down though and continued with their over the top approach and eventually got the bit of luck they needed and pulled a goal back 4 minutes from half time with a long range half-volley effort finding the top corner giving Runcorn’s trialist keeper no chance, albeit claims of handball in the build-up were turned away by the match Official Mr Miller.
The home side had the momentum and forced two corners in quick succession just before the interval but again the strong defensive unit of the Linnets rear-guard ensured any danger was quickly averted.
Just before the interval Runcorn’s keeper made a fantastic save diving full length to her right to keep out another Egerton long range effort
.
HT Egerton LFC 1 (41) Runcorn Linnets 5 ( Barker 1, 19, 23. Ashley 5. Gillies pen 24.)
Manager John Pickering made a couple of changes at the start of the second half, Ellie Dyson came on down the left for Demi-Rogers and Marcia Jones-Sacharewicz entered the game in place of the hard working Lile Ashley
With Runcorn attacking down the slight slope in the second half it was no surprise the Linnets forced two early corners. Emma Mclarney popping up from centre half to head home at the far post from Molly Hewitt`s corner in the 48th minute
Marcia Jones Sacharewicz played a delightful ball to Jess Bazley for number 7 in the 53rd minute but credit for the initial play and pass to Sacharewicz goes to Katie Evans
With the game won, Runcorn made further changes, Centre back pairing of Beth Middleton and Emma McLarney were replaced by Molly Cawley and Carys Beech, the impressive full backs of Katie Evans and Ellie Isherwood left the field for Beth Graham and Ella Clifton-Stringer, Lile Ashley returned to the game this time on the right of midfield replacing the hard working Molly Hewitt
Jones-Sacharewicz made it 8-1 in the 71st minute thanks to Chelsea Gilles hard work and clever pass to set up the forward,
The last 10 minutes went from one extreme to another, Jones-Sacharewicz made it 9-1 thanks to more quality play from Lile Ashley down the right.
Egerton were still a threat and pulled a goal back 9 minutes from time from one of their guest players, something the young Runcorn defenders need to learn is to sometimes just clear the danger.
A minute later confusion in the Linnets defence led to another Egerton goal making it 9-3
From the kick off Chelsea Gillies played a perfect cross field ball for Ellie Dyson in the 87th minute to run onto, the pacy winger beat the defender, tapped the ball past the keeper and made sure the ball ended up in the back of the net for 10-3
With virtually the last action of the game, Jones-Sacharewicz tricked her way infield, brought Becky Barker into the play, the Skippers quick thinking set up Ashley down the right who beat her marker and set up Dyson with the opportunity for 11-3.
FT Egerton LFC 3 (41, 81, 82.) Runcorn Linnets Ladies 11 ( Barker 1, 19, 23. Ashley 5, Gillies pen 24. Mclarney 47. Bazley 54. Jones-Sacharewicz 70,79. Dyson 86, 89.)
Runcorn Trialist, Isherwood, Middleton, Mclarney, Evans, Rogers, Bazley, Gillies, Hewitt, Barker, Ashley.
Subs Dyson, Graham, Clifton-Stringer, Beech, Cawley, Jones-Sacharewicz. all used.
Manager John Pickering was delighted with 11 goals but a little concerned his defence didn`t protect the trialist keeper who had an excellent game with two of the goals that probably most keepers wouldn`t have saved. Beth Middleton and Emma Mclarney built up a good understanding at the heart of the Linnets defence until they were both withdrawn. But a shout out to Lile Ashley who besides her goal the striker was instrumental in 5 other Linnets goals today and also won the penalty.
All views are that of the Author and not necessarily those of Runcorn Linnets FC, Runcorn Linnets Ladies Management or Players.
Share via
FacebookTwitter
https://www.pitchero.com/clubs
Recent news