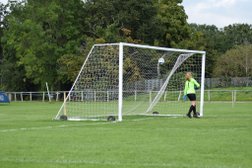 Runcorn Linnets Ladies continued their impressive pre-season with another resounding win this weekend away to Chester City Ladies of the Cheshire Women’s & Youth Premier Division, the league Runcorn have left behind this season

A 7-2 win away from home would be quite satisfying for any team. Today`s opponents a resilient Chester City will be happy with that score line as well, but they will know it could and should have been in all honesty a lot more except for some exceptional Goalkeeping from Chester’s young custodian and wayward finishing on Runcorn’s Part

Manager John Pickering could have easily gone with his near full strength side but opted to give valuable game time to young central defenders and provided the opportunity to some of his other players today, Molly Cawley and Carys Beech started at center half supported by the experience of right back Beth Graham and Left Back Caitlin Gibbons, Megan Pickering taking the position between the sticks backing up the young defenders

Captain Becky Barker started on the bench leaving Chelsea Gillies to take up the Captains roll and supported by the ever dependable Jess Bazley, Demi Rogers started on the left leaving Lucy Wieland on the side-lines and Molly Hewitt who has had injury issues for the last few weeks managed to be fit to start on the right against her old club, Ellie Dyson started in the No.10 position and Marcia Jones-Sacharewicz up front, a much changed side from recent weeks where wins over Northwich Vixens and Pilkington Ladies had given the team a lot of confidence

Runcorn started the game brightly, Chelsea Gillies with a header just wide from a Beth Middleton free kick as early as the second minute, whilst at the other end Chester played a more direct approach with a shot just going wide of Pickering’s left hand post

Runcorn didn't have to wait too long for the opening goal, the impressive Beth Graham fed the ball to Ellie Dyson in the 6th minute and the striker calmly slotted the ball past the advancing keeper to give the visitors a 1-0 lead, something off the training ground with finishing high on the agenda during last week’s training sessions.
With the play centered around the Chester penalty area albeit for a sporadic attack or two from the home side that Molly Cawley and Carys Beech were more than equal too, Caitlin Gibbons was immense at left back and played her best game for a long time since returning from injury, the young central defenders both had exceptional games and should be proud of their performances, the Linnets doubled the lead on 21 minutes, Pickering with a long clearance flicked on by Bazley, Marcia Jones-Sacharewicz controlled the ball and instinctively played in Dyson for her second of the game and a 2-0 lead for Runcorn.

Molly Hewitt playing against her old club cannoned the ball against the bar from distance in the 34th minute before Beth Graham with a worldie from outside the penalty box made it 3-0 with a superb strike that no keeper would have stopped, credit to Gillies for her strength and determination to win the ball and set up Graham to unleash what was probably the goal of the game.

Molly Hewitt in a prominent spell for herself sent over a cross from the right that evaded the last Chester defender allowing Demi Rogers to take advantage stroking the ball past the unfortunate keeper for number 4 in the 42nd minute. Hewitt right on the stroke of half time sent another powerful shot beating the keeper all ends up only to see the ball rebound off the bar for the second time

Runcorn made a number of changes for the second half, recent signing Emma McLarney returning to the club came on with Lily Clifton-Stringer and Beth Middleton, the visitors opting for a back 3, Wieland replaced Rogers on the left, with young Ella Clifton-Stringer taking up the right wing-back position replacing Hewitt. Captain Barker replaced 2 goal hero Dyson and Lile Ashley came into the game partnering Jones-Sacharewicz, Runcorn had the wind behind them in the second half and Chester City were a more prominent force pushing the Runcorn defense into a series of mistakes, this had as much to do with the defenders settling into a new formation, and the wing-backs tracking back, in the 51st minute Chester reduced the arrears, a simple ball into the box should have easily been cleared but left the Chester forward with a simple finish.

As the game went on Runcorn sorted the formation and confidence grew, Ella Clifton-Stringer on the right was outstanding, Beth Middleton using her wing back at every opportunity to push the linnets forward and get Chester on the back foot, In the 65th minute Runcorn were awarded a free kick on the edge of the box after a foul on Jess Bazley. Up stepped the youngest member of the squad Ella Clifton-Stringer a young player full of confidence and much respected throughout this group of players, Ella Clifton-Stringers effort flew past the home keeper in to the top corner for a well-deserved goal and a 5-1 lead to the Linnets

Lile Ashley thought she scored her first of the game in the 76th minute but the Referee judged the striker to be off side and chalked the effort off, a minute later it was 6-1 and Ashley got her goal with a neat turn and strike inside the box assisted by Becky Barker 14 minutes from time.

Manager Pickering withdrew Jones-Sacharewicz with 12 minutes remaining bringing Dyson back into the games , it didn’t take long for Dyson to complete her hat trick, Barker once again with the decisive pass.

In the final 10 minutes fitness was a major factor, Runcorn were constantly moving forward and queuing up to shoot as Ashley had another strike hit the home crossbar for a third time in the game.

In the final piece of action, Chester grabbed a second and again a big helping hand from Runcorn as once again the Linnets gifted a goal to their plucky hosts in the final action of the game.

Manager John Pickering said after the game, he was happy to record another win, but was quick to stress once again its pre-season there’s no prizes and awards at this stage it’s all about match fitness and working on technical plans and miles in legs for the players, I thought our first half performance was pleasing and some of our football was a joy to watch, the second half we took time to settle but we have to remember we’ve brought in 2 new central defenders and moved a full back to central defense and played a new formation so it all takes time to gel, our younger players are learning all the time and I’m particularly pleased with Molly Cawley, Carys Beech and both Lilly and Ella Clifton-Stringer, all had very good games, but they can’t do this without the great team spirit we have within this squad and that’s a compliment to each and every player. As the second half went on our confidence grew and our football at times was as good as we’ve played at any time. Overall I’m pleased but we need to stop conceding sloppy goals it’s all about maintaining concentration throughout the game and doing this simple things and stop complicating issues. As a final point It was nice to see the return of Emma Mclarney in a Linnets shirt today after a short spell away from the game, Welcome back Emma

Player of the Match Ellie Dyson