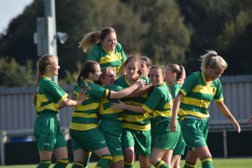 The game was arranged to give the Linnets tougher higher league opposition after a few somewhat one sided friendlies of late.

Runcorn set the tempo straight from the kick off, Lile Ashley shot over with just 19 seconds on the clock but this did not deter a neat Stoke side who went close themselves 2 minutes later.

Molly Hewitt on the right got in the first of several tantalising crosses in to the opposition box but nobody could make the telling connection as the ball as it flashed across the goal.

The opening goal came in similar fashion to last week Becky Barker the scorer at the second attempt after the keeper blocked her first effort, Lile Ashley once again with the decisive assist but credit to Chelsea Gillies and Jess Bazley for the hard work and commitment in the midfield

Megan Pickering pulled off a fine save in the Runcorn goal in what was a frantic opening spell to the game.
Chelsea Gillies rattled the post on 10 minutes from a Lile Ashley corner before Barker got her second on 11 minutes latching on to another Hewitt right wing cross as the home side moved into what seemed like a comfortable lead.

But 2-0 is a superstitious score in football and the inevitable happened as the visitors capitalised on a Linnets defensive mistake in the 14th minute, Pickering did everything she could to save the first effort but the rebound fell kindly to the City of Stoke forward who scored to reduce the deficit

Runcorn played some really nice football and pushed the visitors back often, Lile Ashley’s shot cannoned of the bat in the 17th minute, Ellie Dyson placed the rebound wide of the target

Having hit the post earlier Chelsea Gillies then beat the keeper from distance in the 27th minute to extend the home lead, the midfielder making the space and lining up an unstoppable effort

The quality of the opposition was there to be seen and City of Stoke pressed forward forcing another corner, from the set piece only a good reaction save from Pickering when the ball deflected off her own player kept the visitors from going in at half time with 2 goals on the board not just one.

HT Runcorn Linnets 3 (Barker 5, 11. Gillies 27) City Of Stoke 1 (14)
Runcorn Linnets Ladies made several changes at half Emma McLarney came on at centre half for Beth Middleton, Lucy Wieland replaced Ellie Dyson on the left, Beth Graham took up the right back position in place of Katie Evans and Caitlin Gibbons replaced Ellie Isherwood at left back, the other change being Marcia Jones-Sacharewicz, replacing Lile Ashley up top, it was Jones-Sacharewicz who increased the Runcorn lead after being put through by Barker on 49 minutes, the forward calmly lobbing the advancing keeper, again Gillies and Bazley were instrumental in the build up from midfield to free Barker to make the telling through ball.

This merely spurred the visitors on to enjoy their best period of the game forcing several corners and getting behind the home defence on more than one occasion.
One dangerous crosses in particular evading all of the in rushing forwards.

Ellie Dyson returned to the field in place of Becky Barker on 60 minutes, Molly Hewitt was also withdrawn replaced by Amy Kelly down the right

The Linnets looking second best in the tackle at this stage were indebted to a fine piece of play from Ellie Dyson who closed down a back pass to the visiting keeper the ball spinning up and heading into the net the striker deciding to make sure the ball crossed the line for goal number 5 for the Linnets in the 81st minute.

With new life in the legs Jones-Sacharewicz laid the ball to Lucy Wieland cutting in from the left, the winger curled her effort wide of the far post.

City of Stoke who throughout the second half had raised the tempo scored a late consolation goal, a foul throw by the home side turned the ball over and were slow to react, the visitors quickly got into gear and switched the play, with the striker beating Pickering at her near post with a low driven shot.
.
FT Runcorn Linnets 5 (Barker 5, 11. Gillies 27. Jones-Sacharewicz 49. Dyson 81.)
City of Stoke 2 (14, 90.)

Manager John Pickering will be happy that his Linnets side kept their unbeaten record against WMRWPL, Leek Town, Redditch and now City of Stoke added to that list.
City Of Stoke was just the quality side his team needed at this stage of pre season.
With his near full squad at his disposal not all players were used today but they can take heart that in 9 league games last season the Linnets used 20 different players and maintained a 100% record. When the chance comes players must be prepared to take it.
The visitors had an abundance of quality on display which made for a great game of football and we wish them well for their season and it wouldn’t be any surprise to see them up at the business end of their own Division.

All views are that of the Author and not necessary those of Runcorn Linnets FC Ladies Management or Players.