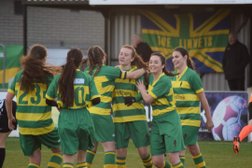 A share of the spoils and a first North West Regional League point for the Linnets today. But they will feel a little aggrieved that they were punished far too often for offside for what they saw as being too quick for a flat West Kirby back line. A point the watching Assessor was quick to make to today`s official after the final whistle. Manager John Pickering told his players they did enough to deserve the three points from this game on another day they would have surely taken it.

Lile Ashley was put through by Lucy Wieland on 4 minutes but the striker put the the shot over the visitors bar as Runcorn forced two early corners.

West Kirby hit back with a free kick of their own as the Linnets became increasingly frustrated at being penalised for what they saw as every time they played the ball through the visitors high line. They did take the lead on 31 minutes though as Molly Hewitt, assisted by Becky Barker with a cheeky outside of the right boot pass to Ashley who then provided the final pass for Hewitt who capitalised on a West Kirby mistake this time play was allowed to continue amid claims from the visitors defence with Hewitt putting the Linnets ahead. Hewitt had a chance early in the second half before a West Kirby forward with an open goal at her mercy some how contrived to miss the target completely.

The visitors pressing forward in numbers more in the second period scored from a corner on 62 minutes Runcorn claiming keeper Lyndsey Hopley was held back before the ball entered the net.

The home side regained the lead in the 74th minute, Jess Bazley with a well timed ball into space down the right, full back Beth Graham on the overlap cutting inside the covering defender slipped the ball to Marcia Jones-Sacharewicz on the edge of the box, the skillful forward jinking one way then the other before coolly slotting it past the keeper restoring the Linnets lead.

West Kirby were still a danger though and their best chance came once again from a corner the Linnets gifting the visitors a free header inside the six yard box at the back post.

Amy Kelly made a tremendous run down right finding Jones-Sacharewicz in the box but her shot was deflected inches past the post by the keeper denying the Linnets a late victory.

As the Linnets adjust to life in a new league Manager John Pickering was quick to point out that this season they will have to battle for points right to the end. Runcorn were dealt a blow 24 hours before the match with forward Ellie Dyson sustaining stiches to her knees in a cycling accident. With Ellie Isherwood, Demi Lee Rogers and Megan Pickering close to a return and pressing for places a point today wasn`t to bad a result.
All views are that of the Author and not necessarily those of Runcorn Linnets Ladies its Management or Players.