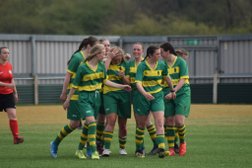 An entertaining 4-4 draw today for Runcorn Linnets Ladies in their first appearance on a pitch since the 20th of December last year. The visitors Northwich started the brighter but gave a needless penalty away in the eight minute the Vixens defender fouling Lile Ashley in the box Chelsea Gillies converting the spot kick. Runcorn were temporarily reduced to 10 players when the sin bin rule was used in the 18th minute for dissent. The visitors then equalising with a high shot over keeper Lyndsey Hopley on 26 minutes. A sweeping move between Becky Barker and Molly Hewitt saw Ashley get on the end of a cross in the 33rd minute to restore the Linnets lead. Ashley made it three direct from a free kick 2 minutes before half time.

The Linnets increased the lead just 40 seconds into the second half as Lucy Wieland swept in another fine Hewitt cross. Having made several changes at half time the home side with the match a friendly made more wholesale changes which had a bearing on their final performance. This compounded with keeper Hopley sustaining an injury saw the visitors dominate the last 20 minutes. The Linnets not helping themselves with errors and bad judgement when it came to game management. A draw was probably the right result on the day the Linnets looked weary late on having not played for so long. So its onto Cheadle Town Stingers next week in another friendly.
FT Runcorn Linnets 4 (Gillies 8pen, Ashley 33,43. Wieland 46.) Northwich Vixens 4 (26,66,74,81.)

Manager John Pickering wasn`t too despondent with the final score a match fit Linnets 4-1 up just after half time will be a different proposition in a league game. He also knows the need to strengthen certain area`s of the squad before the real stuff kicks off later in the year. As for Northwich you have have to admire their determination to get the result back to 4-4.

All views are that of the editor not necessary of Runcorn Linnets Ladies their players or Management.

Changing rooms will not be in use, all players to arrive at the ground fully kitted. Players and staff to bring own drinks