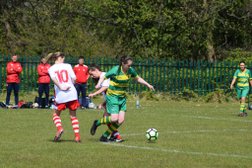 Runcorn Linnets Ladies were today beaten by 6 goals to 1 against North West Counties Premier Division side Cheadle Town Stingers. The visitors a level above the Linnets were well worthy of the result. Big, strong well organised and with an understanding which bore on telepathic at times. It was just the game Runcorn needed in their fledgling North West Regional education. Was the scoreline reflected of the game some people will say yes some will say no. But until the opening goal it was hard to pick out the team from the higher division from the two sides.
Runcorn should have gone in front from a free kick but the goal was disallowed having been touched in by a second Linnets player the irony being it was going in anyway. Class told as Cheadle capitilised on 3 Linnets errors to punish the home side, further compounded by a fine move by the visitors for the fourth before half time.

Runcorn in the second half were far quicker to the ball than in the first more tenacious in the tackle and were rewarded with a goal of their own from a free kick by Lile Ashley, who had someone not followed up on another Ashley free kick which the keeper palmed against the bar the Linnets may have had a second.

If I had to be critical of the Linnets having carved out a couple more chances in the second half shot selection let them down with the visitors keeper crying out to be chipped on both occasions. These are the fine margins when you step up a level chances coming as a premium and you have to take them when they come. Cheadle to had chances in the second half and further goals saw the game end comfortably for the visitors.

Manager John Pickering and his coaching staff will have learned a lot from this game. For far too long back in their last season in the Cheshire League (they`ve only played 4 NWWRFL South league games) they were the boxer who knocked every opponent out in the first round now they need to go the whole 15 rounds to win. Thinking time is a lot less the further up the pyramid you go If the Linnets girls get that right with a few more crisper passes they will be fine. Good luck Cheadle Town in your Premier Division campaign once the new season starts later this year.
POM Chelsea Gillies.
All views are that of the author not necessary of Runcorn Linnets Management or players.

Changing rooms will not be in use, all players to arrive at the ground fully kitted. Players and staff to bring own drinks