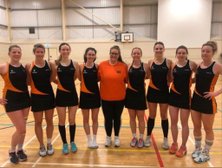 TOP OF THE TABLE!!

It was a big game for the regional 1 team today, playing top of the table Eagles. We started strong, with the game going goal for goal. Some really good through court defence saw Naomi coming for a flying interception that was taken to goal meaning we finished the first quarter only one down. 11-12

We didn’t have our usual second quarter dip and the circle defence continued to pile on the pressure forcing multiple changes in the Eagles team. We capitalised on our turnovers and finished the quarter 28-24

We bought on fresh legs in the third quarter for impact, keeping the attack the same. Issy continued to feed some brilliant balls into the circle, confusing their tactics. Third quarter finished 41-40

With everything to play for, we went into the last quarter buzzing for the win. We kept our centres, managing to go up by 2 or 3 goals as the quarter played out. But eagles weren’t letting up without a fight and with the pressure piled on, came back at us several times, but we didn’t let them take the lead. The last few minutes saw the ball propelling from end to end and shots being missed- defence at both ends were tenacious, grabbing every rebound. But it was Rushmoor who kept their composure when it mattered and finished the game 2 goals up. A great win. Final score 53-51 to Rushmoor.