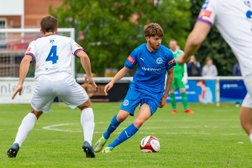 Warrington Rylands 1906 are delighted to announce that Owen Robinson’s loan from AFC Fylde has been extended keeping the attacking midfielder at Gorsey Lane until January 2022.

Robinson, who signed his first professional contact with the National League club in June, joined Rylands at the start of the season after impressing for his parent club against the Blues in a pre season friendly.
Having played in 14 of Rylands 17 games so far this season, and scoring two goals, he has become an important part of the Rylands team which has established itself amongst the early season promotion contenders in its first season in the league.