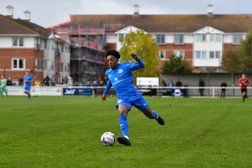 Blues come out on top after tough challenge

SHANS THE MAN AS RYLANDS TOP THE TABLE
BY GARRY CLARKE

Six weeks after playing their first cup game of the 2020/21 season Warrington Rylands 1906 hosted Avro in their first home league game of the campaign at Gorsey Lane, and emerging 1-0 victors they moved to the top of the NWCFL Premier Division table.
Having defeated Northwich Victoria in their opening game last week, the points did not come easy for the early season pace setters requiring a late penalty to overcome their Oldham based visitors.
Rylands started quickly. Inside the first minute Kane Drummond got on the end of Paul Shanley’s cross at the near post but his shot was blocked by a desperate defender. Five minutes later Charlie Doyle surged through the Avro defence into the penalty area; his shot was partially blocked causing the ball to loop harmlessly into the goalkeeper’s hands.
With Rylands dominating possession, a well organised and determined Avro side worked hard to frustrate the home side preventing them from working the ball through their ranks. When Rylands tried to go over the top of the defence their front runners were caught off side on several occasions.
Avro twice went close to breaking the deadlock in the closing minutes of the first hall. A Liam Ellis free kick flew just wide of the target and James Hampson had a header saved by Rylands goalkeeper Graeme McCall.
Avro started the second half as they finished the first – twice drawing good saves from McCall in the opening five minutes. Oumar Camera tested the keeper with a long range free kick while Ellis also had a shot saved.
In a game of few chances, Rylands had a penalty appeal rejected in the 68th minute when Drummond went down in the area, ten minutes later referee Lee Budworth pointed to the spot when Ste Milne was bundled over. Shanley sent the keeper the wrong way as he dispatched his spot kick into the roof of the net.
A few minutes later Gary Kenny went close to doubling the lead meeting a Shanley cross at the far post, but the Rylands captain directed his header inches the wrong side of the post.
As time was running out Rylands hung on as Avro launched an all out assault on the Blues goal. Defenders threw their bodies in the way to block shots, Dan Hewitt flashed a shot just wide and a dangerous cross played across the face of the goal was just out of Alex Frost’s reach at the far post with the goal at his mercy.
Four minutes into stoppage time Shanley was given an opportunity to score a second from the penalty spot when Andy Scarisbrick’s run towards goal ended with him being fouled. However, his spot kick sailed high over the bar into the night sky.

After the game manager Dave McNabb commented “Well that’s a game that certainly won’t be remembered. It wasn’t a great performance, we were sloppy on the ball and forced things at times against a resolute Avro side who caused us problems on the break with the way they set up to frustrate us. It was a disappointing performance but ultimately we scraped a win and three points is the main thing.”
Team v Avro – McCall, Jones (McNamara), Wolhuter (Freeman), Kenny, Lees, Gerrard, Doyle, Scarisbrick, Potter (Milne), Shanley, Drummond. Subs not used Simpson, Denman.