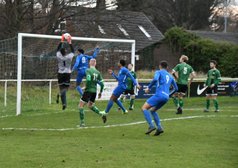 Rylands go down in Shootout Misery to Local Rivals

The anticipation for this day on and off the field was high for Rylands. In addition to the Macron Cup game ahead, the club were celebrating the opening of their new state of the art clubhouse.

The first half was a hotly contested affair in the middle of the park with both teams creating half chances to shoot but little else in the first period. Unfortunately, the final ball was lacking for each team and at half time the score was 0-0.

As the second half began, Rylands attacked at will and in the 47th minute, a lovely piece of passing from the Rylands midfield saw the ball threaded to Scarisbrick who shot over by a matter of inches. Rylands continued to camp in the 1874 half and on 56 minutes, got through again as Wolhuter fed Drummond who hit a rocket that skipped just wide of the post.

After 1874 failed to convert a free kick, Rylands immediately counter-attacked and got the ball to Scarisbrick in the box who beat the goalkeeper but was denied by the post as the defence pounced to clear the ball out of danger. From the clearance, Northwich had their own shot bounce off McCall’s crossbar.

The opening goal on 80 minutes was a strange fluke. 1874 sub, Taylor Kennerly played a hopeful ball into the box which bobbled and bounced over McCall’s flailing hands and bounced into the net to make the score 0-1 to 1874.

Rylands pushed for an equalizer and got their deserved reward in the 92nd minute. A speculative ball forward landed at the feet of substitute, Jay White who floated the ball over to Buckley who volleyed it home to even the score at 1-1.

The whistle then blew and both opening penalties were saved by the goalkeepers, followed by scores for White and Hare. Buckley then scored for Rylands and McCall made an excellent save to keep out Woolley and give Rylands the advantage in the shootout. Adam Jones then missed for Rylands and the shootout was levelled by James Ormrod. A miss for Ste Wolhuter left Harry Cain to put the ball away and win the shootout for 1874.

Rylands now travel to Skelmersdale United in the North West Counties League on Tuesday night before travelling to Irlam next Saturday for a tasty clash.

DAVE MCNABB
Any game you lose on penalties is always going to be tough, it is a toss of a coin. I thought Northwich, who are arguably the best side in the league were strong in the first half. I thought we showed them a bit too much respect in possession but second half it was still close but I thought we edged it. Their keeper has made an absolute world class save. It’s taken until the last kick of the game to get an equalizer and take it to penalties but once it gets there, it’s the luck of the draw so you can be disappointed but you can’t be too critical because it’s such a lottery.

The players did everything that Fraser and I asked of them at half time. They were more competitive, better on the ball, pressed higher and we ultimately drew the game. The fact we lost on the flip of a coin isn’t any consolation to them.

This league has been a massive step up for us. The team has matured well this season and they continue to do so but we can give anyone a good game and we showed that today. 1874 are a great side with a settled squad that hasn’t changed for a couple of years but we competed with them from start to finish. If this were a league game, a draw would have been fair.

MATT WOOLLEY (1874 NORTHWICH CAPTAIN)
Both teams went at it the right way today, we both tried to play football and unfortunately, we had to decide it on penalties which let’s face it, nobody enjoys.

We came out to press from the front which is normal for us. We know Rylands like to get the ball down and play football so we knew we needed to press aggressively and force Rylands to play a little longer than they wanted to.

Scoring on 80 minutes, we had a right to think we had strong enough characters to see that game out. Rylands never gave up, kept pressing for the equaliser, in the end a long ball forward has been flicked on and the lad has chested and volleyed superbly. It felt a bit of a sucker punch for us but a good finish for him.

We’re a strong side at the moment but there are some great sides also in this division. Rylands have given us a tough afternoon today, Bootle are a great side, Ashton are strong. There is a high level of quality in this division.

GARY KENNY (RYLANDS CAPTAIN)
It’s a tough way to lose a game of football. We showed them too much respect in the first half but in the second period I think we’ve dominated it there. It’s hard to take going out like that but some big positives we’ll take away. The main thing we’ve picked out of that is you can’t play for 45 minutes. If we play for 90, we can beat them all.

Lewis up front was great today, caused their centre half no end of problems. I thought Callum Lees was absolutely immense today. He’s a commanding defender and he showed his class again today. Kane was another one, bags of energy caused problems from start to finish.

It’s hard to take for the lads who’ve missed pens today. At the end of the day, if the keeper goes the right way, he saves it. You can’t criticise someone for having the guts to step up and take a penalty in the first place and that’s what we all just said in the dressing room.

We’ve taken a lot of heart from that performance though and now we have to go into Tuesday at Skelmersdale, next Saturday at Irlam and carry that on.