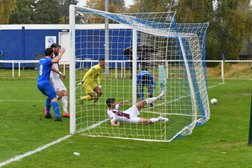 END OF THE ROAD FOR RYLANDS

Blues capture hearts but crash out to National League opposition

Once again, the feeling of excitement of another historic day down at Gorsey Lane was palpable as the teams, TV crew and devoted fans arrived at the ground for another huge day of FA Cup football courtesy of Warrington Rylands and their visitors, York City from the National League North.

There were smiles and jokes between the two managers as they first took to the dugouts but the smiles changed to focus as soon as the whistle blew and their players began to implement their instructions.

It was York who settled first, putting the ball down on the floor and causing Rylands’ back four to be on their toes early, which they were. Patiently, Warrington Rylands allowed the centre backs to feed the full backs who were both active in setting up counter attacks. The approach almost came to fruition numerous times in the first 20 minutes as the Rylands attack countered at will but were undone by superb defending from the professional outfit.

As York settled into the match, they also started to create goal chances, coming close with a free kick on 27 minutes that required an acrobatic save from McCall for Rylands to keep it out. The next ten minutes continued this way with York moving the ball well and the home side countering with fluency, potency and poise as both defences found themselves making crucial challenges until the deadlock was broken five minutes before the break.

After a useful break made down the left for York, the ball was cut back to the onrushing York Captain, Newton who was felled on the 18-yard line for a free kick. He took the kick himself and placed it perfectly in the bottom right corner of McCall’s net to open the scoring and put York in front.

York were screaming for a penalty a minute later after a challenge on Stain by Simpson but the referee saw no foul and Rylands cleared their lines as far as Akil Wright who cannoned a shot off the post.

As the second half began, the home side brought all the passion, swagger and vigour that has become their trademark during this FA Cup run as they pushed York deep into their own half to press for an equaliser. Shanley was finding space down the left and making good use of the ball. One such attack, 7 minutes into the second half saw Warrington’s two centre backs combined to get a cross over for Ste Milne but his header was centimetres over the bar.

Then in the 55th minute, Scarisbrick broke through into the box and freed the ever enthusiastic Shanley who was felled. No hesitation from the referee to award the penalty and the spot-kick hero from the previous round, Andy Scarisbrick did everything right; he sent York ‘keeper Pete Jameson the wrong way but the ball went an inch too far right and bounced off the post. Drummond was there to pick up the loose ball but was crowded out by York defenders and the ball was cleared.

Undeterred by his miss and showing his desire, Andy Scarisbrick broke through the York defence a moment later and laid the ball to Milne as he was tackled. Milne shot at goal but his shot was wide of Jameson’s post.

Rylands were pushing York back now as they searched for an equaliser and York were looking to pounce on the counter; Jake Cassidy proving himself a headache but dealt with well by Gerrard who shepherded the big striker too wide to trouble McCall.

Meanwhile at the other end, Drummond was proving himself to be a nuisance and Pete Jameson had to have his wits about him to keep his side in front. In the 75th minute, he broke through York’s defenders again and rounded the keeper but again was forced wide and his subsequent shot was wide of the post.

In the last ten minutes, the front five for Rylands made some very nervous moments for the home side before the referee blew his whistle to signal the end of a pulsating FA Cup tie played in front of the BBC cameras for the first time and giving Warrington Rylands a taste of what to expect in seasons to come.

Far from being outmatched by opposition from three leagues above them, Dave McNabb and his team will take great confidence from a wonderful FA Cup run and concentrate heavily on NWCFL action and FA Vase competition as they open their League season with an away trip to Northwich Victoria this Wednesday before welcoming Goole Town to Gorsey Lane in the FA Vase next Saturday.