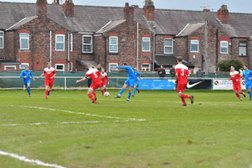 KANE ABLE TO SET RYLANDS ON ROAD TO VICTORY BEFORE DISMISSAL

Warrington Rylands 1906 breached a 37 year gap by reaching the fourth round of the FA vase for the first time since 1983 by beating fellow NWCFL Premier Division side Longridge Town 2-1 in a third round tie switched to Gorsey Lane due to the Preston sides pitch being unfit.

Rylands were forced to play for 81 minutes with ten men after Kane Drummond was red carded by referee Shaun Taylor for using foul and abusive language when reacting to being fouled by Longridge’s Ben Fletcher.

Celebrating his 20th birthday, Drummond has a happier memory of his first contribution to the game. Rylands kicked off, quickly moved the ball forward down the left flank, Joe Coveney cut the ball back to Drummond who calmly tucked the ball into the corner of the net 30 seconds after kick off.

With their man advantage Longridge started to control the game, although dominating possession they created few clear cut chances. Their best opportunities in the first half coming when Owen Watkinson headed narrowly wide from a corner and Brad Wicks forced Rylands goalkeeper Graeme McCall to turn a shot over the bar.

Rylands went into the half time break with a two goal advantage. In the 34th minute Coveney found Milne who clinically drilled his shot into the net from the edge of the area.
The home side’s nerves were jangled a bit in the 58th minute when Paul Turner headed home from close range having been found by a good cross from Jack Anderton.

Longridge continued to exert pressure on the Rylands rearguard but were unable to find a way through a hard working, well organized committed defence which dealt with everything thrown at them.

With Longridge pushing more men forward in a desperate search for an equaliser extra space was left at the back for Rylands to exploit on the break. Milne went close to a second goal with a shot which just cleared the bar, Coveney landed a free kick of the roof of the net and goalkeeper Lee Dovey pulled off a remarkable save to keep out an Andy Scarisbrick shot.

Surviving an optimistic animated penalty appeal when a Longridge shot struck a defender, Warrington Rylands held firm to book their place in Monday’s 4th round draw.