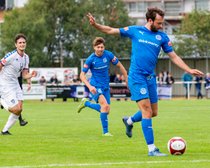 NO CUP UPSET REPEAT AS RYLANDS PAY THE PENALTY

Warrington Rylands knocked Whitby Town out of the FA Cup at the same stage last year on penalties, however Whitby were determined there would be no repeat this year, and it took a penalty to set them on their way to victory.

After a goalless first half there was barely a minute on the second half clock when the referee pointed to the spot judging Adam Buxton to have tripped Josh McDonald. Marcus Giles coolly dinked the ball into the centre of the goal as Rylands goalkeeper Graeme McCall dove to his right.

Both sides had their chances in an evenly matched first half as play switched from end to end, although neither keeper was over worked. McCall turned a Jacob Hazel shot from distance around the post for a corner and his Whitby counterpart Shane Bland held onto an Owen Robinson shot from the edge of the area.

The half ended with a melee in the Rylands goalmouth, after a deflected Giles cross had been safely claimed by McCall, which resulted in McCall and Hazel being booked.

Five minutes after the deadlock had been broken; Whitby increased their advantage in spectacular fashion. A free kick was played into the Rylands area; letting the ball dropped over his shoulder Hazel hooked it over his head and into the top corner of the net.

A minute before Hazel’s goal Rick Smith had gone close to equalizing for Rylands, heading inches over the bar from a corner. His and his team mate’s appeals for a penalty for holding were dismissed, as were later appeals for hand ball when a Whitby defender blocked a Ste Milne shot.

Just after the hour mark, Smith was in action clearing off the line when a McDonald shot had found its way past McCall.

Rylands finished the game with ten men, Joe Coveney being shown a red card for a tackle from behind in the 85th minute. Either side of Coveney’s dismissal Whitby scored two further goals, McDonald netting in the 83rd minute and Hazel bagging his second of the afternoon in the 90th.