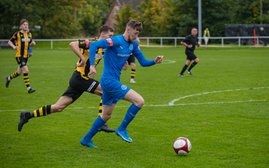 Warrington Rylands who so often won via penalty shoot out on their way to winning the 2021 FA Vase found the boot on the other foot as 2020 FA Vase winners Hebburn Town out gunned them from the spot after a goalless draw.

There had been little to choose between the two teams when they met in the Vase last season and there was even less in the FA Trophy.

Hebburn scored with their 1st, 3rd and 5th penalties and with Rylands missing their first two the pressure was on Joe Coveney, who had been outstanding in the 90 minutes, but his spot kick was palmed away by Hebburn goalkeeper Mark Foden. Foden was one of the main reasons the game ended goal less pulling off several vital saves.

The visitors enjoyed the territorial advantage throughout the game but rarely troubled the Rylands goalkeeper, while Rylands forced into playing more of a long ball game than they are used to created the better chances.

In the opening exchanges both sides were confined to shooting from distance, Foden collecting a Callum Dolan shot and Graeme McCall safely handing a Connor Bell shot.

The first real goal scoring opportunity arrived in the 28th minute when after good link up play between Declan Walker and Elliott Morris, a Walker cross found Morris whose shot was well saved at point blank range by Foden.

Dylan Archer fired a shot over the Rylands bar as did Coveney over the Hebburn bar.

On the stroke of half time Dolan battled his way through the visitors defence but his shot was deflected wide by the outstretched foot of Foden.

Hebburn opened the second half on the offensive with Tom Potter curling a shot across the face of Ryland’s goal which flew inches wide of the target.

Rylands introduced new signing Joe Bunney for his debut on the hour mark and his impact was almost immediate. Beating several defenders he drilled a dangerous cross into the Hebburn box which Foden did well to cut out.

Hebburn had two efforts cleared off the line in 60th minute goalmouth scramble from a corner, while Foden kept on making good saves twice keeping out shots from Bunney and Morris.

The 2020 winners held their nerve to eventually beat the 2021 winners in the battle of the Vase holders.